Collating details about the ongoing projects through RTI Act and other sources, green activists have estimated heavy loss of precious and pristine tree cover in the Western Ghats.

BENGALURU: About 7.35 lakh trees may be cut down for upcoming highway projects in Karnataka with most of them in the Western Ghats region — a biodiversity hotspot. This estimate is according to data in RTI documents, official estimates and field survey done of the project area by experts and NGOs.
Most of these National Highway projects are in various stages — with some cleared or in the process of getting environmental clearance.

Meanwhile, the state government was recently slapped with a fine of `50,000 for failing to file information on tree felling for highways projects and compensatory afforestation to the National Green Tribunal (NGT). The state government has to submit these details to the tribunal by July 10. Collating details about the ongoing projects through RTI Act and other sources, green activists have estimated heavy loss of precious and pristine tree cover in the Western Ghats and the serious consequences on rainfall pattern and climate in the state.

Sahadev Shivapura of Paschima Ghatta Jaagruta Vedike says, The “Western Ghats is considered one of the 18 biodiversity hotspots in the world... more than one lakh trees have already been chopped down in the last 2-3 years for various ongoing projects. The seven districts of Kodagu, Chamarajanagar, Hassan, Chikkamagaluru , Shivamogga,  Uttara Kannada and Belagavi are the worst affected. Even coastal districts of Udupi and Dakshina Kannada that border Western Ghats will lose precious biodiversity.”

According to a rough official estimate, for ongoing highway-widening projects, 52,000 trees have already been felled. This includes NH 75 (13,500 trees), NH 13 (500) and NH 4A (38,000).  P8
However, no details are available on the number of trees being felled in Shiradi Ghat for the Bengaluru-Mangaluru highway project.

Meanwhile,  Malenadu activist Sriharsha Hegde says that irreparable damage has been done to the carbon sink in Shivamogga, Chikkamagaluru and other districts.
He adds, “The tree-felling list is very long... Tirthahalli-Shivamogga widening resulted in loss of 1,000 trees, while Tirthahalli-Hosangadi widening resulted loss of 500 trees. Sagar-Honnavar road widening took down 4,000 trees.”

In fact, the 400 KV High Tension Power Line from
Mysuru to Kozhikode has resulted in chopping of 54,000 trees in Kodagu, while the government has been claiming loss of only 8,000 trees, says Sundar Muthana of Coorg Wildlife Society. 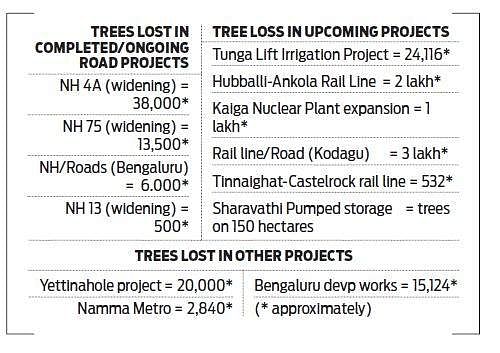