BENGALURU: It is time for the Visvesvaraya Technological University (VTU) in Belagavi to trace marks cards which went missing even before they could reach the respective colleges and students. According to sources, the marks cards belong to students of BDT College of Engineering Davanagere, which is a constituent college of VTU and Bapuji Institute of Engineering and Technology Davanagere for the 8th semester and have gone missing since one month.

In a regular process, the university prints marks cards at Belagavi and send them to concerned regional centres, from where they get  distributed to colleges.

In this case, the marks cards were sent from Belagavi to the regional centre in Mysuru. But those marks cards did not reach the two colleges located in Davanagere, and are also missing from the regional centre.
However, the university has constituted an inquiry committee headed by the principal of MS Ramaiah Institute of Technology, Bengaluru. Officials of the university refused to reveal the recommendations of the committee saying that it has be placed before the Executive Council meeting.

Prof Satish Annigeri, registrar evaluation of VTU, accepted the fact that the marks cards are missing and said, “We have received a report from the inquiry committee and the same will be placed before the Executive Council for further action.”

However, realising the fact that getting a hold of the missing marks cards will be a long process, the university had issued consolidated marks cards to students.

Justifying this, registrar evaluation of VTU said, “As the consolidated marks cards for the course is issued, it will not be a trouble for students. But yes, we have to issue them the 8th semester marks cards. It cannot be done until we find the missing  ones.” 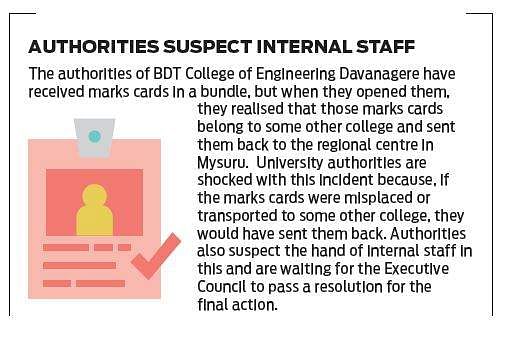