Lokayukta Justice P Vishwanatha Shetty has directed Women and Child Development and the Police Departments to take effective steps to trace women and children who have gone missing in the state.

BENGALURU: Lokayukta Justice P Vishwanatha Shetty has directed Women and Child Development and the Police Departments to take effective steps to trace women and children who have gone missing in the state.In the last three years, 2,236 women have gone missing but 1,798 are yet to be traced. The Lokayukta added that between 2015 and 2017, 444 boys and 335 girls are still untraced.

The Lokayukta said that the officers concerned have to show higher commitment in tracing those who have gone missing.The Lokayukta is holding an enquiry into the complaint filed by one Yoga Venkatesh with regard to illegal trafficking of children and pushing them into begging - an offence under Section 76 of the Juvenile Justice Act.

The Lokayukta observed that some of those missing are children of migrant labourers. Therefore, it is possible that some have gone back to their native states, the Lokayukta said while adjourning the hearing to October 10.This is when the officials have to submit the status report.

The Women and Child Development Department said that a meeting of Principal Secretary and Director of Women and Child Welfare Department with the officers of State Crime Records Bureau was conducted with regard to steps to be taken to curb cases of missing children and women.

Women missing from state homes,  reception centres
There are eight homes for women and three reception centres in the state. These homes receive women in distress and provide rehabilitation. Out of 49 women who were missing from the institutions run by the Women and Child department between 2015 and July 2017, only 19 women have been traced. 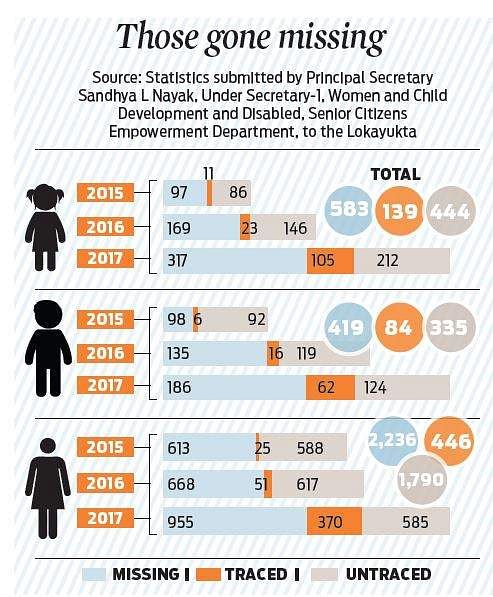 Stay up to date on all the latest Karnataka news with The New Indian Express App. Download now
TAGS
Lokayukta Women and Child Development Police