Koliwad offers to pay for furniture taken from official quarters

Former Speaker of Legislative Assembly, K B Koliwad, who has been issued a notice by Congress for his comments on Chief Minister H D Kumaraswamy breaking down, has courted a fresh row on use of govern

BENGALURU: Former Speaker of Legislative Assembly, K B Koliwad, who has been issued a notice by Congress for his comments on Chief Minister H D Kumaraswamy breaking down, has courted a fresh row on use of government furniture at his private residence after he resigned from the post of Speaker.
Karnataka Assembly Secretariat had, in 2016, furnished K B Koliwad’s official residential quarters on 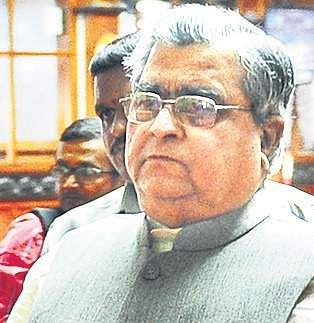 Crescent Road with four king-sized cots with attached board storage, one set of Italian sofa, a massage chair and a pigeon box. Koliwad put the Assembly secretariat in a fix as he failed to return the four cots and the Italian sofa set when he vacated the official bungalow after losing in the recent Assembly election and moved into his private residence at Abbigere.

Koliwad has requested the Secretariat to evaluate cost of the furniture he hasn’t returned and send the bill to him.However, the letter has raised a few questions. Why did Koliwad take the furniture provided by the government at his official quarters to his private residence? Will the Secretariat seek the original price of the furniture or the price of second hand (used) furniture now? While S Murthy was not available for comment, Koliwad dismissed it as a non-issue as he has offered to pay for the furniture.

IT WAS DAMAGED: former speaker
“I have not violated any norm or rule. There is a legal provision to pay for the furniture and take it to private residence. I have already written to the Secretariat in this regard,” he said. As for the reasons to retain only the cots and sofa, and return the massage chair and pigeon box, Koliwad said, “The cots and the sofa set have suffered some damage due to usage. So I felt it would be better to pay for them instead of returning them, in accordance with the legal provision.”