The next time you choose to step out with a plastic bag in your hands, chances are you could be facing a  Rs 500 fine.

BENGALURU: The next time you choose to step out with a plastic bag in your hands, chances are you could be facing a  Rs 500 fine. Three years after the Bruhat Bengaluru Mahanagara Palike (BBMP) enforced a plastic ban in the city, the civic agency is now gearing up to enforce it with the help of technology. 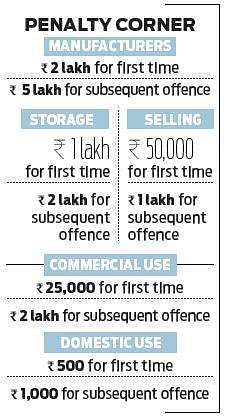 According to officials, the agency is procuring hand-held devices which will be able to capture details of the persons using plastic bags, including their picture and the location where they were spotted. The machine will also generate a spot penalty receipt automatically, instead of the manual receipts being issued currently.

Speaking to Express, BBMP Commissioner N Manjunath Prasad said the agency was readying to become stricter about enforcing the ban. In all, 110 junior health inspectors have been hired on a contract basis to supplement the in-house health inspectors. “The devices will be similar to the ticket-vending machines used by the Bangalore Metropolitan Transport Corporation (BMTC) and will have additional features such as a camera and a screen enabled with a Global Positioning System (GPS) interface. The machines will be procured locally and can be modified to meet our requirements,” he said.

Explaining further, the Commissioner said that the BBMP official would use the device to take a picture of the offender or the shop where plastic was being sold. This would include the sale of plastic covers, cups and plates. “The GPS-enabled machine will record the exact location along with the time and date where the health inspector captures the offence. There will be a centralised dash board for monitoring and every time the penalty is levied, the dash board will show the amount collected along with the ward details. These can be monitored by senior officials in the central office,” he said. This system will use an integrated portal developed by the BBMP.

Karnataka government had banned plastic below 40 microns in 2015 and, a year later, banned the use and manufacturing of plastic bags of any thickness. Since then, authorities have been conducting raids and seizing plastic materials, mostly targeting bulk producers and vendors.“The new system with these hi-tech gadgets will be in place in the next two months. Penalty can be paid either by cash or even card,’’ Prasad said.

According to sources from the BBMP, the agency is struggling to enforce the ban. The use of plastic bags is rampant from the  vendor level to the end user. Poor enforcement of the ban has also led to many problems for the BBMP. It is unable to improve the process of garbage disposal since trash consists of plastic. “If we stop using plastic, we will have a better solution for garbage as well as flooding of roads. As authorities, we will insist on the ban but the people also have to change their mindset. The collusion of officials as well as the garbage mafia, which makes the issue complex, must also be dealt with,” a source pointed out.

Now we are on Telegram too. Follow us for updates
TAGS
plastic bag BBMP plastic ban