Mango growers in Karnataka, who were looking to reap a good bounty by exporting their mango crops, are disappointed as the exportg business has been hit due to Nipah virus scare.

BENGALURU: Mango growers in Karnataka, who were looking to reap a good bounty by exporting their mango crops, are disappointed as the exportg business has been hit due to Nipah virus scare.
This year, growers were expecting more mangoes to be exported to different foreign countries as they had received Global Good Agriculture Practice (GAP) certificate in 2018 that will enable them to export mangoes grown in their farmlands. Karnataka State Mango Development and Marketing Corporation Ltd (also known as Mango Board) said that last year, 7,000 to 8,000 tons of mangoes were exported to various countries, including the US, Singapore, London, Brazil, the UK and other countries. This year, they were expecting the export to almost double.

In 2017, as many as 225 growers were GAP-certified and were growing mangoes in 200 hectares. The GAP certification is necessary for exporting products to European and other Western countries. This year, the number of GAP-certified farmers has increased four times. Karnataka, one of the top mango growing states in the country, cultivates mangoes in 1.7 lakh hectares in 16 districts including Kolar, Chikkaballapur, Dharwad and Ramanagara. Annually, the state has the capacity to grow more than 10 to 12 lakh tonnes of mangoes during the season.

This year, being an off-season, the number of mangoes will be fewer. Speaking to The New Indian Express, Mango Board M D Nagaraj said there was less yield due to hailstorm, rain and strong wind this year. Mangoes from India, especially from Karnataka, started going to Australia, Gulf countries, US and European countries. “Meanwhile, there was the Nipah virus scare. In many countries, especially Middle East, they have banned products from Kerala where Nipah virus broke out,’’ he said.

APEDA to the rescue

The Agricultural and Processed Food Products Export Development Authority (APEDA), a Government of India undertaking, has come to rescue of the farmers. “APEDA is issuing a place of origin certification for these products, including mangoes. As mangoes are grown in Karnataka (not Kerala), with the help of the certification, we are now able to export. We are hoping we will cross last year’s figure,’’ Nagaraj said.
Channa Reddy, who grows mangoes at Srinivasapura taluk of Kolar district, said he has an annual yield of 200 tons of mangoes at his place. “I have passed all tests for my stock and mangoes grown are good enough to get exported. But Nipah virus scare has hit our export dreams. Though experts and authorities are saying that one should not get scared for this, people of other foreign countries are scared to buy them, and I could not send even half the expected mangoes to other countries from my farm,’’ he said.

Experts are constantly saying that mangoes are not dangerous to consume. According to horticulture scientist Dr S V Hittalamani, one should not be scared to eat mangoes. “The bats will be in the forest area, mangoes are not grown in forests but in farms. Bats do not come here and there is no question of Nipah. The quality of mangoes are good. But the scare will hit the export business for sure,’’ he said. 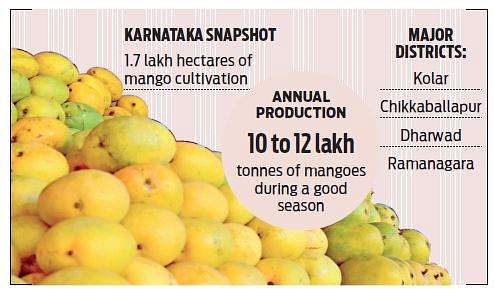 Now we are on Telegram too. Follow us for updates
TAGS
Nipah virus mangoes