Axiostat is first Indian wound dressing to get USFDA nod

Axiostat, a first aid dressing that stops uncontrollable bleeding within 2-3 minutes of its application, being used by the Indian armed forces, and paramilitary forces in India and 12 other countries,

BENGALURU:Axiostat, a first aid dressing that stops uncontrollable bleeding within 2-3 minutes of its application, being used by the Indian armed forces, and paramilitary forces in India and 12 other countries, received US FDA (Federal Drugs Administration) approval on Wednesday. It is the first Indian wound care product to receive the FDA clearance. 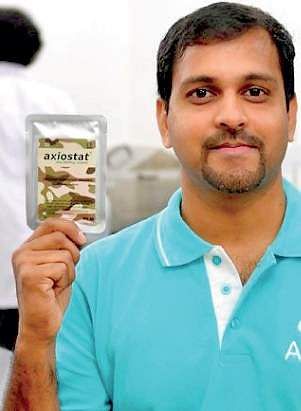 It is regularly used by the Indian Armed forces, Border Security Force, National Security Guard, and other para-military forces, as part of their defence kit, during their operations at the border and conflict zones such as the North East. Axio Biosolutions has its corporate office in Bengaluru and Axiostat is currently manufactured in Gujarat.

Apart from the military, it is also used by hospitals, ambulance services, industries and relief aid. The dressing was used in the 2014 Russia-Ukraine conflict.Axiostat uses chitosan, a naturally occurring polymer found in shellfish that can stop bleeding after angioplasty in less than four minutes, as opposed to the usual 30 minutes. The dressing can easily be removed by irrigating with saline water. It was earlier approved with CE mark in Europe. The FDA clearance now allows Axiostat to be marketed in the US as over-the-counter (OTC) product to control bleeding.

The dressing is a patented product that has prevented countless deaths due to bleeding in battlefields, hospitals, and road side, worldwide. Leo Mavely, CEO, Axio Biosolutions, said, “This is a validation of the performance, safety and efficacy of Axiostat in bleeding control. This is a ‘made in India’ product for the global market.”

The dressing is also used for Cardiovascular procedures. Cardiac patients are often at a high-risk of uncontrolled bleeding due to blood thinners administered prior to catheterisation procedures. Axiostat is proven to be effective during vascular procedures when compared to traditional compression methods that are high risk.

Axio was founded in 2008 by Mavely, a bioengineer, to develop a novel biopolymer-platform-based products for wound care. Numerous government hospitals and reputed private institutions such as AIIMS, Manipal, Apollo, Breach Candy and Fortis among others also use the product.