Karnataka: Students worried as their 100-year-old school is set to face the axe

A government primary school is all set to be demolished in its centenary year this year. Ironically, Chief Minister Siddaramaiah had in his state budget announcd that state-run schools which ar

BENGALURU:  A government primary school is all set to be demolished in its centenary year this year. Ironically, Chief Minister Siddaramaiah had in his state budget announcd that state-run schools which are 100 years old would be identified as heritage schools and upgraded. The demolition move comes barely six months after closing down a 147- year-old aided school citing low student numbers. But though the Government Primary School in Siddapura, established in 1919, has a healthy student strength, it will make way for a community hall and a memorial hall if the Social Welfare Department has its way. But the Education Department has been kept in the dark, according to officials.

There is a big question mark on the future of around 60 students, mostly runaways and street children.
The Social Welfare Department plans to construct an Ambedkar Bhavan and a Professor B Krishnappa memorial hall. A copy of the proceedings of the meeting where this decision was taken is available with The New Indian Express.

The proceedings mention that the decision was taken based on directions issued by the Social Welfare Minister who considered a request submitted by the MLA of the constituency R V Devaraj. As per the records available with the Department of Public Instruction, the school started in the year 1919, and has 60 students studying from class 1 to 7th with three teachers. Interestingly, all these students live on the school premises itself as they are rescued and street children. 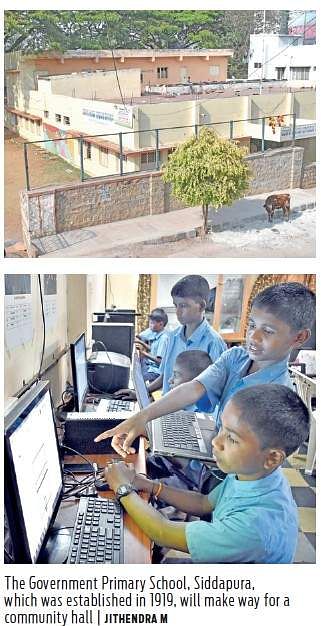 An NGO  which works with street children admits rescued kids in this school and provides food for them in the morning and night. A teacher from the school said, “As there are 15 rooms in the school, we have left a few for these kids to stay in. During  afternoon they get midday meals, while morning and night meals are taken care of by an NGO.”

Around 60 students of a 100-year-old government-run primary school received a rude shock as they were served a demolition notice by the government instead of upgrades or new facilities in the school’s centenary year. The Government Primary School, Siddapura, which was established in 1919, will make way for a community hall and a memorial hall if the Social Welfare Department has its way. A decision to this effect was taken by the Social Welfare Department recently and shockingly, the Education Department was kept in the dark, according to officials.

Asked if the school had taken any measures, headmaster Naga Naik said, “We have informed the Block Education Officer (BEO) about the  issue and the same will be forwarded to higher authorities through him.” Meanwhile,  school authorities have no information about alternative arrangements. Both teachers and students don’t know what will happen to them if the school is demolished.  The Social Welfare Department makes no mention of a building to be constructed for the school to continue functioning. Speaking to TNIE, PC Jaffer, Commissioner for Public Instruction, said, “I have no information about this issue yet. I will write to the Social Welfare Department and check.”