Union Parliamentary Affairs Minister H N Ananth Kumar has alleged that both Congress and JD(S) have made internal as well as external agreements for the ensuing assembly elections.

GADAG: Union Parliamentary Affairs Minister H N Ananth Kumar has alleged that both Congress and JD(S) have made internal as well as external agreements for the ensuing assembly elections.He told reporters here on Tuesday: “Siddaramaiah claims that he will give proof on Amit Shah and Kumaraswamy meeting. I challenge him to show it now. If he fails do so, he has to step back from the polls immediately.” 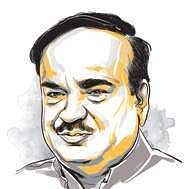 Saying that the division in the Congress will benefit the BJP, he said: “The Congress has two groups --one is of old Congress leaders and another is of those migrated to it from other parties. The Congress of Parameshwara and Mallikarjun Kharge is different from Siddaramaiah Congress.”

Expressing concern over the deteriorating law and order situation in the state, he said crimes like rape and loot have become an order of the day and the Siddaramaiah-government has failed to check them. Saying that the situation is no different in Gadag, he said the city has turned into a centre for goonda activities. The district lacks basic amenities. He appealed to the people of the district to root out the Congress.

He held a road show in Sortur and Mulgund. Hundreds of villages rushed to see Ananth Kumar. Youths enthusiastically responded to the roadshow by participating in large numbers and chanting ‘Modi, Modi’. Gadag BJP candidate Anil Menasinkai and other party leaders were present.

Dharwad: Union Minster Ananth Kumar has accused the Congress of keeping North Karnataka region underdeveloped for all these years and swindling money in the name of its development.He said whatever development works had taken up here were initiated by the BJP. Suvarna Soudha and IIT are some of them.

Stay up to date on all the latest Karnataka news with The New Indian Express App. Download now
TAGS
Congress BJP Ananth Kumar

Singer Shaan to come up with a song on 'coronavirus warriors'