In Ranjitpura, red seeps into everything

From water stored in houses to roads, this village in Ballari district is coated with dust from iron-ore mining, leading to poor health of villagers and bad crop

BALLARI:As temperature hovers over 40oC and afternoon sun spits fire, a group of elderly men from Ranjitpura sits in a bus shelter helplessly looking at the never-ending convoy of trucks passing by their tiny village in the mining heartland of Ballari. Thousands of trucks transporting ore from mines to factories each day have left a trail of dust. It is visible everywhere, including the water stored inside houses in the village with around 300 families.

The whole village wears a skin of dust, and this is leading to health complications among villagers and severely damaging agriculture.“Some people have made a lot of money from mining. But, all that we have got from it is dust,” 63-year-old Channabasappa tells The New Indian Express, while pointing to a layer of dust in the bus shelter in which he was sitting with other villagers. “It has become difficult for us to live here ... we don’t have an option. Dust will reduce our life spans.”Thousands of trucks pass through Ranjitpura, located around 15 km from Sandur in Ballari district, each day.

Mining is not new to the region. It was thriving even many decades before the Reddys entered the business and put Ballari on the national map for mining. In the last two decades,however, the quantam of ore mined and transported has increased significantly — thanks to technological advances and also the demand.

The booming business has changed life in the village. Land belonging to many villagers has been acquired for mining and agriculture is no longer sustainable. Prior to the mining boom, which brought along the dust woes, villagers cultivated onion, jowar, corn, and other vegetables. Land under cultivation has been reduced to less than 50 acres from over 200 acres. Youngsters have migrated to towns and cities looking for employment and some are still waiting with a hope of getting jobs in the mining firms located close to their village. The companies, however, are accused of not employing local youth. Depending on the requirement, firms employ youth for around seven to eight days in a month and the remaining days they just keep looking for other work, which is hard to come by. For those few days of employment, they are paid `490 per day and `80 worth food coupon.

Youngsters while away time 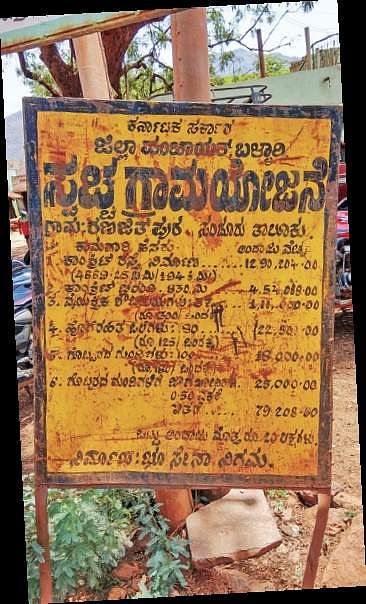 “We are dying here owing to the dust left behind by mining and people coming from other places get jobs in the factories. Is this fair?” asks Jadiyappa, a villager, while pointing at a group of young men, who are whiling away time sitting under a tree near a temple playing a traditional board game. While few get jobs in mining firms, some work as drivers, most end up daily wagers.

Like in the past, during this election season too, villagers put forth their problems before politicians approaching them seeking votes. However, all that they have been getting is just a promise of making their lives better and dust-free, but nothing has been done. “Politicians come here during polls and when we bring our plight to their notice, they immediately give us an assurance. However, nothing changes, as they come back again only after five years for the next elections,” says Subbanna, an elderly man.
The administration seems to have taken some measures like getting the roads cleaned and sprinkling water on the roads so that dust can be contained to some extent. However, these measures have hardly helped.

Sandur was categorised as one of the 39 “most backward” taluks in the state by the D M Nanjundappa Committee that had looked into regional imbalances and suggested various measures, including effective implementation of government programmes to improve quality of life. Ironically, for people in Ranjitpura, life has only become more difficult in the past decade or so. While dust is taking a toll on their health, they do not have a hospital and depend on mobile clinic that provides them with medicines.

Burial ground lost to mine

“We do not even have a burial ground of our own. The one that was there in the village has been taken over by a mining firm and it is in their control now.  For any funeral, we need to get their permission and get the keys to access it. We have to approach them for even performing the third-day ritual,” rues Maryappa.

Sandur is Congress’ pocket-borough and the Ballari Reddy brothers do not seem to have much of an influence in this part of the district. In the 2008 election, the BJP led by Reddys and Sriramulu won eight of the nine assembly segments, but Sandur had voted for Congress. It was represented by M Y Ghorpade, a seven-time MLA, and in the last two elections, E Tukaram has represented Sandur in the assembly. Locals say, he has good chances this time too.

According to environmentalist Abdul Samad Kottur, dust from mining is a major concern in Sandur, Hospet and Ballari. “It leads to various health hazards, including silicosis and has an adverse effect on crop yield as a layer of dust prevents photosynthesis,” he says. Silicosis is a lung disease. He suggests that all firms take measures to address the problem.

As the villagers continue to breathe dust tainted air and battle health hazards, Ballari Zilla Panchayat has put up a board announcing measures taken under the “Swachh Grama” scheme. Dust has overshadowed the measures that the ZP claims to have taken up — so much so that even the board announcing it is covered with dust owing to movement of trucks.

Onions with no shine bring tears

Every house in Hosahalli, which is around 5 km from Sandur, has a large stock of onions.  Ballari onion is known for its unique taste and Hosahalli is among the places where it is cultivated on a large scale. Here, everyone cultivates onion.   Prices have dropped significantly this year from a glut in the market. Waiting for better prices, almost every farmer in this village has stored onions outside homes. In all, around 500 truck loads have been stored. According to farmers, onion is a three-and-half month crop and it is cultivated on around 600 acres in the village. “There are no takers for our onions now. They ask us to sell at B600-700 per quintal and in turn they sell the same in cities for B20 per kg, which is B2,000 for a quintal.

We will not get anything by selling at such low price as we spend around B40,000 per acre,” says Shivakumar, a farmer, who has stored onion outside his house. Dust from mining has also impacted crop yield, adds H K Basavaraj, who has a three-acre farm. He had cultivated onion on one acre and has kept one truck load of onion. Prices began to drop from last week of February. Till then, farmers like K Channabasappa, got B1,500 per quintal and after that prices fell to B600 per quintal. “Our onions get good price in Andhra Pradesh and not in Karnataka market. In places like Bengaluru, people prefer shiny onion. Ours is not shiny, but very tasty,” he adds.What about the government’s promise of minimum support price? Pat comes the reply: “Leave it sir, that’s not going to happen. Purchasing just one out of every ten truck loads of onion will not make any difference to us.” These farmers do not show any interest in elections, but feel Congress will win here.