The debate over senior Congress leader M Mallikarjun Kharge being denied the chief minister’s post that was brought up by Prime Minister Narendra Modi recently has struck a chord.

MYSURU: The debate over senior Congress leader M Mallikarjun Kharge being denied the chief minister’s post that was brought up by Prime Minister Narendra Modi recently has struck a chord with Dalits here, which became evident when a section of people in the Dalit-dominated Ashokapuram here on Sunday demanded that Kharge be made the CM, and not Siddaramaiah.

Kharge, who had hopped on to an open jeep for a roadshow while campaigning for sitting MLA from Krishnaraja constituency M K Somashekar, stopped near B Basavalingappa Circle. Kharge had just started to address a gathering there when some of them started shouting: “We don’t want Siddaramaiah as the CM again. You (Kharge) should be the CM.” 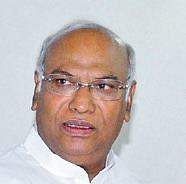 Kharge was surrounded by Dalit leaders who reminded him of the “sabotage” that proved costly for Karnataka Pradesh Congress Committee (KPCC) G Parameshwar during the previous elections. Parameshwar, who had contested from Koratagere assembly constituency, lost after Kurubas (the community to which Siddaramaiah belongs) did not vote for him, they charged. Even as Kharge kept mum, angry Dalits said, “We know whom to vote for in the elections.”

As some among of them started to vent their anger in high-pitched tones, the police intervened and made way for Kharge’s vehicle to leave the spot. Earlier, while addressing the gathering, Kharge who was taken aback by the sudden outburst of emotions, tried to calm down the angry mob by telling them “it was the decision of the party high command”. “Dr B R Ambedkar has given us the freedom to decide on your own, without sounding a diktat on whom to support. However, when the fight is between Congress and BJP, you should support Congress,” he said.

Stay up to date on all the latest Karnataka news with The New Indian Express App. Download now
TAGS
M Mallikarjun Kharge Dalits