This constituency is all set for a game of musical chairs

The results of the upcoming assembly polls will be an interesting one for  Pulikeshinagar constituency which will see its sitting MLA Akhanda Srinivas Murthy in a whole new light.

BENGALURU: The results of the upcoming assembly polls will be an interesting one for  Pulikeshinagar constituency which will see its sitting MLA Akhanda Srinivas Murthy in a whole new light as he has switched parties to contest the May 12 polls as a Congress candidate. The former JD(S) man, backed heavily by Chief Minister Siddaramaiah, managed to get a Congress ticket, pushing out Congressman Prasanna Kumar, who contested against him and lost in 2013.

In return, Kumar then headed straight to the JD(S) and managed to get a ticket to contest against Murthy. In the midst of this battle, BJP, which chose to field a relatively unknown candidate, is not expected to make any inroads here. In 2013, there were 1,78,292 people eligible voters in the constituency of which around 1,00,505 ended up voting. However, this year, the number of eligible voters has gone up. As many as 2,31,913 eligible voters are presently residing in Pulakeshinagar and voter turnout is expected to be in favour of Murthy — regardless of the party he represents.

The area, which sees severe civic problems ranging from bad roads to sewage and law and order issues, is unlikely to vote in favour of the BJP — leaving the fight between Kumar and Murthy.There were some allegations made about entire households missing from the voter’s list. According to the Congress, around 21,000 households have been omitted from the list and this could lead to votes being skewed in favour of a particular candidate. Residents, however, say their mind is already made up in favour of the incumbent MLA. 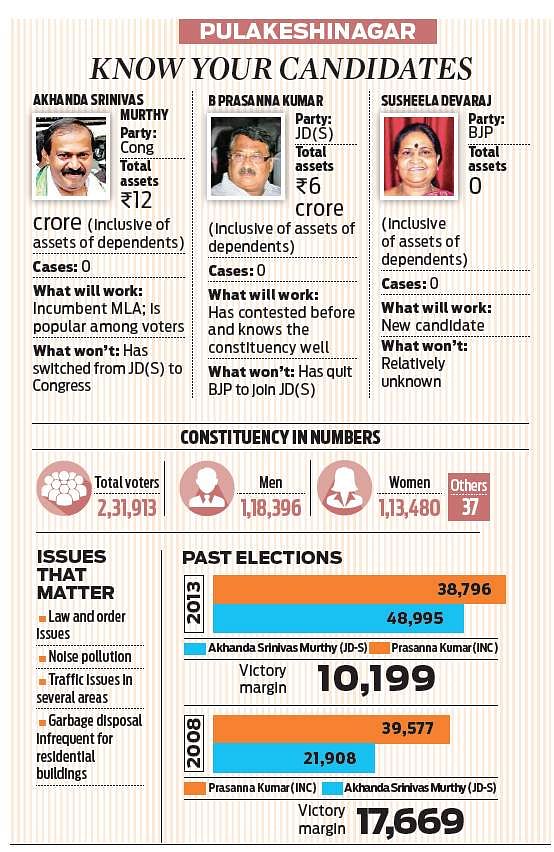 Stay up to date on all the latest Karnataka news with The New Indian Express App. Download now
(Get the news that matters from New Indian Express on WhatsApp. Click this link and hit 'Click to Subscribe'. Follow the instructions after that.)
TAGS
assembly polls Akhanda Srinivas Murthy Congress