Shift in stand comes after exit polls say that none of the major parties will get a clear majority.

BENGALURU: With most of the exit polls predicting a hung assembly, the major parties and their senior leaders are bracing up to face emerging compulsions. Chief Minister Siddaramaiah on Sunday conveyed his readiness to adapt to changing scenarios by declaring that he is ready to step aside from the race for Chief Minister’s post if the situation so demands. He also said this was his last election, but added that he will remain in active politics.

To a question about the renewed demand within the Congress for a Dalit CM, Siddaramaiah said that he was not against a leader from that section of society becoming the chief minister. “I am ready to make way for anybody among Dalits to become the Chief Minister,” he declared, reflecting a clear departure from his earlier assertion during campaigning that he will return as chief minister after the election with a clear majority.

When pressed further on his stand, Siddaramaiah said, “It is the prerogative of the Congress high command to take a call on the issue of a Dalit chief minister. I am ready to make way for anybody that the high command chooses.” 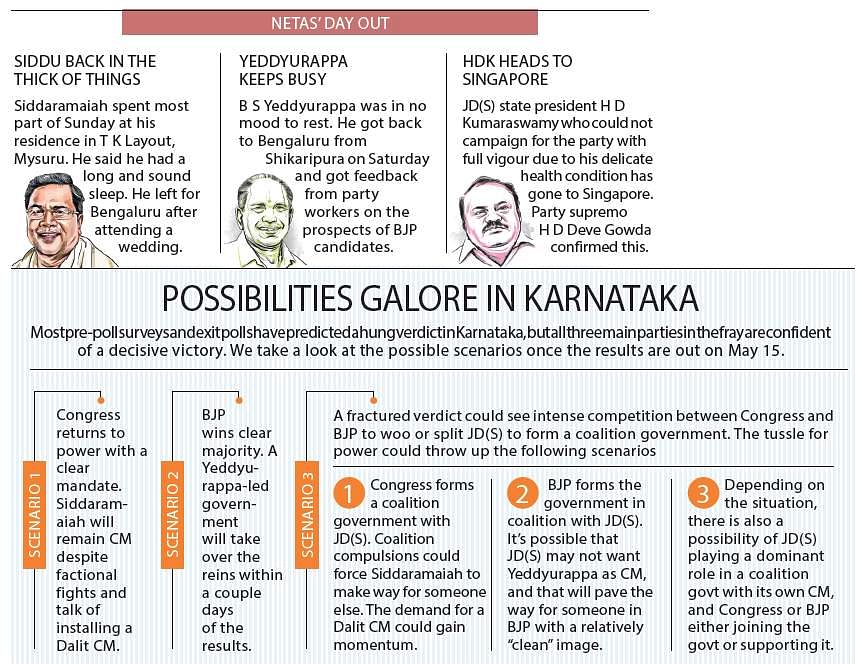 The change in Siddaramaiah’s stand is being seen as an expression of his readiness to prepare the ground for a post-result scenario if Congress is compelled to seek the support of JD(S) to form a coalition government to keep BJP away from power. The race within Congress for the Chief Minister’s post is expected to hot up if the party fails to get clear majority and emerges the single largest party, compelling it to join hands with JD(S) to form the government.Congress veterans Mallikarjun Kharge, K H Muniyappa and G Parameshwara are seen as the frontrunners as a Dalit CM.

Karnataka Pradesh Congress Committee president G Parameshwara, who has been vocal in asserting that he too is in the race for the CM’s post this time, conveyed this again on Sunday, though not in as many words. “The Congress high command will decide the Chief Minister after seeking the opinion of all the MLAs,” he said.

Reacting to Siddaramaiah’s statement in Kalaburgi, Kharge said, “I am not the one who is out seeking the CM’s post with an application in my hand. This issue has come and gone many times in my long political career. If it has to happen, it will happen.”

While the people will have to wait till May 15 for the announcement of the election results, backroom manoeuvres have started in all the three parties to face a possible fractured mandate.Out of power for the past 10 years and with its chief ministerial candidate H D Kumaraswamy facing health issues, it is a struggle for existence for JD(S). However, the party is almost certain to put up conditions for a tie-up and Siddaramaiah is clearly “an untouchable” for H D Deve Gowda and Kumaraswamy in any power-sharing arrangement.

BJP, which is determined to end the Congress rule at any cost in Karnataka, is said to have already made preliminary moves to outsmart Congress in getting JD(S) support in the event of a hung assembly.
According to JD(S) sources, the two national parties could even try to engineer a split in JD(S) to accomplish their mission to come to power in the state.

Reacting to Siddaramaiah’s statement that he is ready to make way for a Dalit as chief minister, BJP state president B S Yeddyurappa said it is a clear indication of Siddaramaiah accepting defeat. “Siddaramaiah has accepted defeat. He is seeing the writing on the wall. BJP will win the election and I will take oath as CM on May 17 or 18,” Yeddyurappa said. BJP MP Sriramulu was more vocal in his attack. “Arrogant Siddaramaiah is changing his tune after the exit polls. The man who was asserting that he will continue to be CM has realised the impending defeat,” Sriramulu said.

Stay up to date on all the latest Karnataka news with The New Indian Express App. Download now
(Get the news that matters from New Indian Express on WhatsApp. Click this link and hit 'Click to Subscribe'. Follow the instructions after that.)
TAGS
Siddaramaiah Karnataka polls hung assembly