Former chief minister Siddaramaiah is Congress president Rahul Gandhi’s first choice to head the party in Karnataka, sources in the party have said.

BENGALURU: Former chief minister Siddaramaiah is Congress president Rahul Gandhi’s first choice to head the party in Karnataka, sources in the party have said. However, despite persuasion by none other than Rahul himself, Siddaramaiah is said to be reluctant to take up the post but is instead lobbying for M B Patil to replace Karnataka Pradesh Congress Committee (KPCC) chief G Parameshwara, who has been made Deputy Chief Minister in the JD(S)-Congress coalition government. 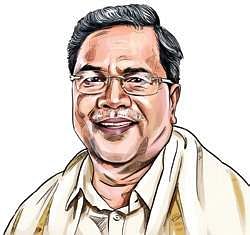 Sources privy to the discussion around the KPCC chief’s post told TNIE that despite the loss of face that the party suffered in the election under his leadership, Siddaramaiah continues to be the Congress president’s favourite. This has proved to be a stumbling block for senior leader D K Shivakumar, who is keen to become the KPPC chief and a minister as well.

“The way Siddaramaiah went into elections and how he led the party during campaigning has left Rahul Gandhi with the impression that he is a great administrator. He is keen on making Siddaramaiah the KPCC chief but the discussions have been put on hold for now,” said a source. Rahul’s trust in Siddaramaiah comes despite the former chief minister facing a crushing defeat on his home turf Chamundeshwari. Despite Siddaramaiah taking moral responsibility for the party’s drubbing in the assembly election, he was made leader of the Congress Legislature Party under Rahul’s instructions.

“Yes, he was asked to take over as the KPCC chief after he refused to be a minister. But Siddaramaiah is not keen. He doesn’t even want to push for his son’s accommodation in the ministry,” said a source close to Siddaramaiah.

Siddaramaiah also happens to be the Congress’ choice to head the yet-to-be-formed coordination committee — a body that will ensure smooth functioning of the JD(S)-Congress coalition government.
Not everyone in the party is, however, happy with the plan to make Siddaramaiah the KPCC chief.
“We have already lost a lot of Vokkaliga and Lingayat votes due to lack of representation of the two major communities. We cannot afford to ignore the communities anymore,” said a KPCC office-bearer.

Realising the need for composite representation of communities, Siddaramaiah is said to be pushing the case of M B Patil, a Lingayat, as the next KPCC chief. The Congress’ plan to have two deputy chief ministers — one Dalit and another Lingayat - failed after the JD(S) refused to agree to the arrangement. With Parameshwara, a Dalit, becoming Deputy Chief Minister and H D Kumaraswamy, a Vokkaliga, being CM Siddaramaiah has suggested that a Lingayat be made the KPCC chief to balance the caste equation.
“If not Shivakumar, the party should at least consider the likes of Dinesh Gundu Rao,” said a Congress leader expressing disappointment in Rahul’s preference for the former CM.