Kambala is scheduled to start in all its glory at Kakyapadavu in Bantwal taluk from Saturday.

MANGALURU: Slushy fields in parts of the costal region are set to reverberate with thuds of robust hooves landing on earth, as brawny buffaloes race with each other, their riders running in tow. Kambala is scheduled to start in all its glory at Kakyapadavu in Bantwal taluk from Saturday.

About 150 pairs of buffaloes will run across the fields in three districts — Dakshina Kannada and Udupi in Karnataka, and Kasargod in Kerala. The districts will see 18 Kambalas this season, which runs till March. 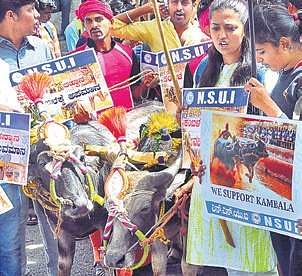 Kambala, which was traditionally held to help farmers plough land with fun and fervour, has been caught in controversies in the recent past, with some activists batting for the traditional sport while others object to it citing animal cruelty. The festive sport has, however, withstood the criticism and now, the district administration is also taking part in the Pilikula Kambala event, said Shashikumar Rai from the Vijaya-Vikrama Jodukare Kambala.

Preparations are on in full swing, and there is visible enthusiasm among people this year. Over 40,000 viewers are expected to attend each Kambala. “Land is being marked, and stages are being set up for the organisers and audience. Some organisers have gone further by hiring drones to keep the statistics and display it live to viewers,” Rai said.

The participants have been training with their buffaloes for about a month. After 30 minutes of swimming to build stamina, the animals are made to practise on the ground, said B R Shetty, president of District Kambala Committee.

Like the previous years, this time too, interested youth have been trained as runners, caretakers and referees at Miyar Kambala Office, Karkala. “While 25 persons enrolled, 10 were selected to run with the big buffaloes,” said Shetty.

Rai said that while the players will still carry ornamental sticks with sponge-covered ends, it will not be used to hit the buffalo. To comply with the guidelines, the track distance has been reduced from 145 metres to 100 metres, and instructions have been given for the race to end within 24 hours, he added. Besides the usual preparation, which costs about Rs 25 lakh per game, stalls have been made to provide shade and drinking water to animals.

Besides competitive Kambala, about 30 buffaloes are expected to participate in the traditional Sampradayika Kambala, at various taluks, before Bhootaradane, Nagaradane and Devaradane, said Shetty.
However, several people feel that commercialisation has extinguished the traditional essence of the sport. “While earlier, farmers indulged in Kambala to till each other’s land, it is merely a show now,” folk historian Perur Jaru said, recalling the event in Perur village during the Tulu Olympics, conducted from 1991 to 2005.

The  roller-coaster path to the race

Kambala is an annual race organised in two districts of Karnataka and one in Kerala. It is held at different levels and a grand finale is organised to decide the winner of the kambala of a particular area. In 2014, kambala was banned by the district administration of Udupi and Dakshina Kannada after the Animal Welfare Board of India (AWBI) pressed for it following a SC order on May 7 against cruelty towards animals in the guise of entertainment. But the state government wrote to the Centre urging it not to ban kambala, stating that it had been a part of rural life for long, and that there was no cruelty involved in its conduct. In February 2017, the Karnataka Assembly passed the bill to legalise kambala.

Now we are on Telegram too. Follow us for updates
TAGS
Kambala buffaloes