The Urban Development authorities of three districts have allotted sites to nine martyrs’ families who have been waiting endlessly.

BENGALURU: The Urban Development authorities of three districts have allotted sites to nine martyrs’ families who have been waiting endlessly. This action follows Lokayukta Justice P Vishwanatha Shetty initiating suo motu proceedings based on a report “Families of martyrs wait endlessly for compensation from state”, in Th e New Indian Express on July 19, 2018.

While appreciating the steps taken by Mysuru, Hassan and Kalaburagi authorities for allotment of sites to martyrs’ wives or their family members, Justice Shetty has directed the Deputy Commissioners of other districts too to take steps in this regard. According to a status report submitted to the Lokayukta by the Urban Development Department, two applications of martyrs’ families in Kalaburagi, two in Karwar, four in Mysuru, four in Bengaluru Rural, eight in Bengaluru Urban, five in Dharwad and five in Belagavi are pending. 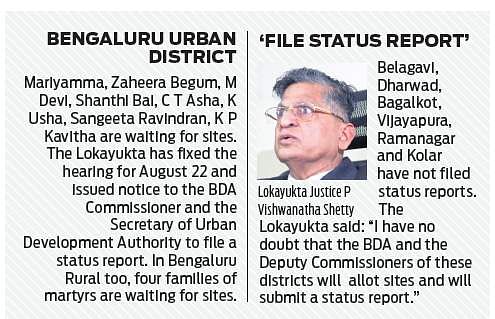 The Hassan Urban Development Authority took a decision on July 30 to allot sites, each measuring 30x40 ft, to the families of all four martyrs. But Karwar Urban Development Authority said that though two sites had to be allotted to two wounded soldiers, there were no housing layouts in its limits. Those soldiers could apply for sites to Mangaluru authorities or Hubballi-Dharwad, if they desire, it said. Taking note of it, the Lokayukta directed it to communicate to those authorities to allot sites to them.

The Hubballi-Dharwad Urban Development Authority had on its agenda allotment of sites to the families of two martyrs at its meeting on July 31, but is yet to take a decision. The Lokayukta said the claimants are the mother and wife of the deceased military persons, who died in action. The officers are required to take immediate action and allot sites, he ordered.

In Belagavi Urban Development Authority limits, the families of three martyrs and two wounded soldiers are waiting for sites. However, the authority has stated that as there are no sites available, it will allot those in Kanabargi layout, which is being formed.

The Lokayukta has directed the authorities to issue Khata to the allottees within a month from today (Wednesday), besides sanctioning necessary plans if they want to start construction.
Director Brigadier Ravi Muniswamy, Department of Sainik Welfare and Resettlement, has assured the Lokayukta that he will pursue the matter with the authorities.