Mohamed Farouk, Director of Ministry of Tourism, told TNIE that in the first phase, the 17 iconic sites in India will be promoted as the best destinations to attract domestic travellers. In the second and third phase, more places are being identified to be put on the national map. There are many more than these, especially in Karnataka, like Karwar, Golconda and other forts. The ministry has set 2022 as the deadline to develop and upgrade the sites with all state-of-the-art facilities. The detailed project report for these sites is being prepared, Farouk said. 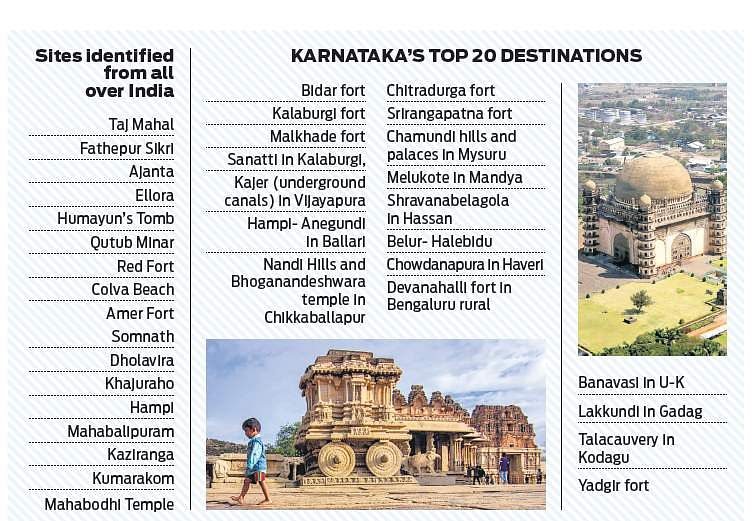 Ramesh K N, Karnataka tourism director, said that the list of iconic sites has only Hampi from Karnataka. So, the department has listed 20 of its top destinations as the best places to visit. “The destinations in Karnataka are being developed in a phased manner. Some of the best destinations are located inside forest areas or are protected by Archaeological Survey of India and cannot be developed any further,” he added.

Travel agents are also coming up with plans and strategies to draw tourists. Rajeev Kale, President and Country Head, Mice, Visas- Thomas Cook India said they have also enumerated some of the most favoured destinations in Karnataka that travellers can explore. With six operating airports in Bengaluru, Mangaluru, Hubballi, Belagavi, Vijayanagar in Hampi and Mysuru, Karnataka has observed an approximate 12% to 15% year on year growth in demand, offering a cultural mix of heritage along with diverse flora and fauna.