The pull of the paintings

For the visitors to Mangaluru, St Aloysius Chapel is a must-see. You will find breathtaking paintings on the ceiling and on the walls.

MANGALURU: For the visitors to Mangaluru, St Aloysius Chapel is a must-see. You will find breathtaking paintings on the ceiling and on the walls. You can stand for days gazing at the paintings, yet, perhaps won’t be able to absorb them all. Each one is a beautiful work of art. Henry Pereira, who has been working as a guide at the chapel for the last eight years, introduces the chapel  to visiting French tourists as 'Sistine of Mangaluru' after the world famous Sistine Chapel in Rome, renowned for its beautiful paintings by Michelangelo. This says it all.

After a period of eighteen months of restoration, the chapel is open, with its magnificent paintings by Italian Jesuit missionary, Antonio Moscheni. According to artists here, the murals  narrate two life stories side by side – that of Jesus and that of St. Aloysius Gonzaga, after whom the educational institution is named. While Aloysius’s life is depicted along the ceilings of the nave,  the life and miracles of Jesus are painted along the walls, the ceiling and the inner portion of the pillars of the aisle. The paintings on the wall speak about the life of Jesus, starting from the original sin in Old Testament to birth of Jesus as saviour, and his death on the cross, resurrection and ascension.

City-based artist Sapna Noronha feels that the painting of Jesus's love for children is Moscheni's masterpiece. It has the finest details of Jesus with children and people watching them. The ceiling narrates the life of St Aloysius Gonzaga, the Jesuit missionary, his birth into nobility, renunciation of worldly life, his work among the plague victims and falling prey to the plague.

The top panel depicts the Apostles of Jesus starting with St Peter. The side panels in the pillars in the first floor showcase the doctors of the church while the ground level of panels in the pillars are painted with pictures of Saints from the Society of Jesus (Jesuits) to which Antonio Moscheni belonged to. The paintings are of two types, Italian frescoes and canvases, Noronha says. Frescoes were painted on the wet lime wall using natural colour powders and canvases were painted with oil colours on linen cloth and then raised to the desired area . The chapel boasts of around 600 sqm of frescoes and 400 sqm of oil canvas paintings, she says. 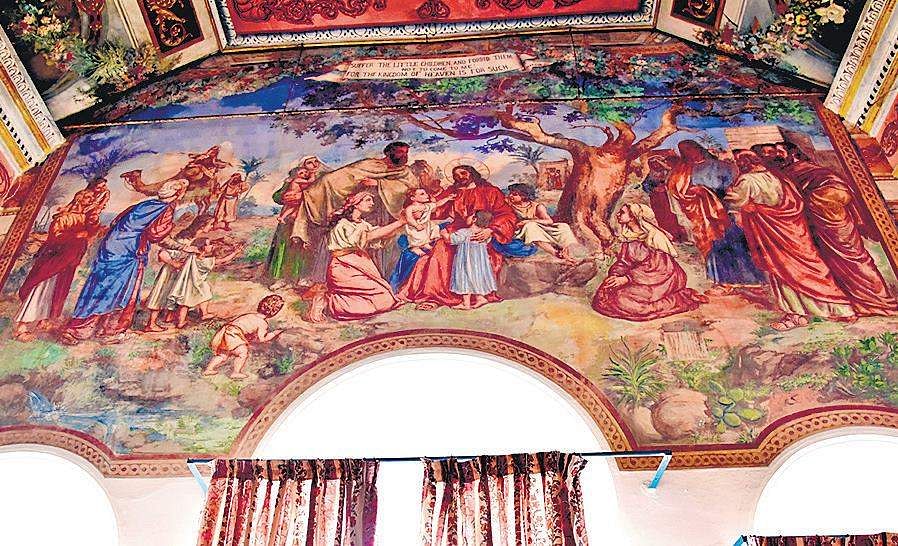 Fr Leo D'Souza, former principal and rector of St Aloysius college, says that the restoration efforts are worth it. “It does not just belong to the college but belongs to entire Mangaluru. The Italian Jesuits sent Antonio Moscheni to paint this chapel. As an artist, it was his way of proclaiming Jesus. We may have to restore it again after some years,” he says.

In addition to the artwork, a few other designs add mystique to the place. The hexagon blocks on the floor of the chapel are three-dimensional, arranged to give one a sense of climbing steps as one walks around. Henry Pereira, the guide,  says the tiles were brought from Bergamo in Italy.“When you come into a place of worship, not necessarily a church, one has to go up to God. And while leaving, having found some solace in the presence of God, one climbs up in life, which is the message of these tiles,” he says.

The stained glass was brought from Belgium at the time of construction, says Noronha.
After a brief visit, French tourists Alain Riflade from Bordeaux and Paul et Dominique from Vannes say that the chapel is a marvellous work of art. “We have seen such paintings only in Europe and to see something like those here again gives a nice feeling,” they say.Henry Pereira feels that the paintings reveal something new every time. And the visitors who have come here at least a couple of times agree.

About The Artist
Antonio Moscheni (1854 – 1905) hailed from the Province of Bergamo in Italy and studied painting in Accademia Carrara in Bergamo. In 1889, he joined the Society of Jesus, renouncing his worldly life and the religious congregation used his talent for best use, of painting churches and chapels.

After painting churches in Croatia and Albania, he was sent to India in 1898 especially to paint the chapel of St Aloysius College, started by Italian Jesuits. Initially, it was planned that Moscheni would return after painting Aloysius Chapel, but his works earned a reputation by then, and he painted the   chapel in Fr Muller Hospital, Agrar Church in Bantwal, St Joseph’s Seminary and Holy Name Cathedral in Mumbai. After starting painting at Santa Cruz cathedral at Kochi, Moscheni fell ill and died in 1905.

When Moscheni Wrote In Kannada
Pericope Adulterae  is a passage in Holy Gospel of St John where a group of scribes and pharisees confront Jesus about the issue of a woman caught in adultery, with the intention of trapping him to see if he says something against Mosaic law of stoning anyone caught in adultery. But Jesus uttered, “Let anyone of you who is without sin be the first to throw a stone at her.” Before answering them, he scribbled in the sand. What Jesus wrote has been a topic of debates.

When Antonio Moscheni painted the chapel, he came out with his version on what Jesus would have written, ‘Proud, arrogant, one who covets other’s property, one who does adultery, who cheats and who tempts people’, possibly pointing at those harbouring evil in heart but accusing the woman of adultery.  Interestingly, Moscheni has written it in Konkani with Kannada script as ‘Garvi, ani ahankari, labadi, praduvari, kapat, nagodi’.

Now we are on Telegram too. Follow us for updates
TAGS
Mangaluru St Aloysius Chapel