The audio tape frenzy seems to be putting Chief Minister B S Yediyurappa in the eye of the storm.

BELAGAVI: The audiotape frenzy seems to be putting Chief Minister BS Yediyurappa in the eye of the storm. On Monday, former Chief Minister Siddaramaiah added fuel to the fire by alleging that BJP state president Nalin Kumar Kateel, Deputy Chief Minister Laxman Savadi or Home Minister Basavaraj Bommai may have released the clip to target Yediyurappa. 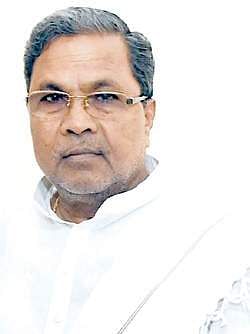 In Belagavi on Monday, Siddaramaiah said, “Yediyurappa is trapped in the audiotape bomb. It is unclear who among Kateel, Savadi and Bommai is behind the tape. The truth is that the BJP leader who recorded it passed it on to the media,’’ said Siddaramaiah.

To recall, in the clip, Yeddyurappa admits that BJP National President Amit Shah had kept rebel MLAs in Mumbai before the coalition toppled. After the tape went viral, Yediyurappa admitted that what he spoke in the tape was true, but after he was reprimanded by the BJP central leadership, he changed his stance, said Siddaramaiah.

The Opposition leader then went on to blame Shah directly for bringing down the coalition.
Meanwhile, KPCC president Dinesh Gundu Rao said the BJP itself has brought out evidence (audio tape) of how the government has failed under the leadership of Amit Shah and Yediyurappa. According to him, a team comprising Yediyurappa’s rivals within the BJP leaked the tape.

“BJP’s state president and some of Yediyurappa’s rivals got the tape leaked. It’s an effort to finish Yediyurappa politically,” he said. Rao reiterated Kateel was not on good terms with Yediyurappa, and may have leaked the tape.

Srinivas Prasad backs CM
Mysuru: Commenting on the viral audio clip, Chamarajanagar MP V Srinivas Prasad batted for CM B S Yediyurappa, saying there is nothing objectionable in the tape.  “Yediyurappa has said that BJP came to power following the resignation of 17 MLAs. There is nothing wrong with this. He was addressing the core committee meeting where one has to speak on internal issues,” he said.  Prasad said Yediyurappa has revealed who was responsible for bringing the BJP to power in the state, while clarifying that the disqualified MLAs and Amit Shah are in no way connected.

Stay up to date on all the latest Karnataka news with The New Indian Express App. Download now
(Get the news that matters from New Indian Express on WhatsApp. Click this link and hit 'Click to Subscribe'. Follow the instructions after that.)
TAGS
BS Yediyurappa audiotape congress Siddaramaiah