MYSURU: Love for nature and preserving native species of trees has led this couple on a fulfilling journey, which won’t be seeing an end anytime soon. N Basavarajappa (64) and his wife A R Sudhamani (56) have helped in planting over 50 lakh trees on agricultural lands by convincing farmers to grow them, in Hunsur and KR Nagar.

For the last eight years, the couple, along with four staffers, has been visiting households and interacting with villagers regularly, providing them with solutions on how to make profits by growing trees on their lands as well as spreading awareness on the importance of green cover.

Sudhamani was already working in the social services space, and had started an NGO called Spoorthi Samsthe in 2009 for the upliftment of women in rural areas, and this motivated the couple to follow their other passion -- conserving nature. 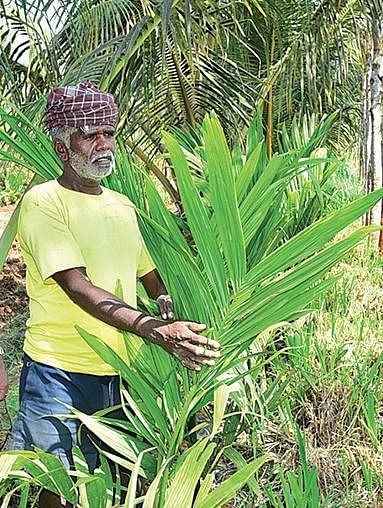 The couple started encouraging farmers to focus on afforestation by growing jackfruit, neem, hebbevu, tamarind, bamboo, teak, honne, silver oak, nerale and other native species. Saplings are procured for the farmers from the forest department, and farmers get Rs 100 from the government for maintaining a tree for at least three years.

The growth of the plants is closely monitored for three years and the couple provide whatever assistance is needed to the farmers. The couple says many farmers have since shown interest in taking up afforestation, but that they wish the government could come up with some kind of a scheme to help them earn money from their efforts in increasing the green cover.

One hurdle the couple faced was convincing the tobacco farmers of the Hunsur and Periyapatna belt to cultivate other saplings. However, they overcame this through extensive talks and educating them on the importance as well as the monetary benefits of growing various kinds  of trees.

Sudhamani told The New Sunday Express that she has watched the green cover in these regions decline due to the growth in population and agriculture. “Tobacco crops, cultivated extensively in the area, use up a lot of firewood. We have lost a lot of tree cover due to this and it’s important to replenish it. Also, with pumpsets and borewells going dry in rural areas, growing trees will be helpful in increasing groundwater levels,” she says.

Talking about the importance of people joining hands to take up afforestation, Basavarajappa says, “The public and farmers must work together with the government in ensuring that the afforestation schemes work. We have successfully planted 50 lakh saplings and one lakh sandalwood saplings this year in the region, which will help the farmers make some money too.”

For a greener tomorrow
Working with the government, the couple has helped several farmers learn the importance of afforestation, under the Krishi Aranya Prothsaha Yojana scheme. Every year in January, the forest department records details from farmers on what species they require and provides them with the saplings during the rainy season. A spot visit is made each year by a forest department officer to monitor the growth of the saplings. Farmers are given Rs 100 for each tree they grow.