Karnataka’s recovery rate up, but active COVID-19 cases a worry

Karnataka on Sunday recorded its highest-ever Covid-19 discharges for a single day at 4,077, improving its recovery rate to 42.81% from 41.49 per cent overnight.

BENGALURU:  Karnataka on Sunday recorded its highest-ever Covid-19 discharges for a single day at 4,077, improving its recovery rate to 42.81% from 41.49 per cent overnight. Across the state, a total of 57,725 patients have been discharged so far.

Another bright spot is the mortality rate, which has consistently been dipping over the past few days, albeit gradually. The state’s mortality rate now stands at 1.85%, which is below the national mortality rate of 2.11%. 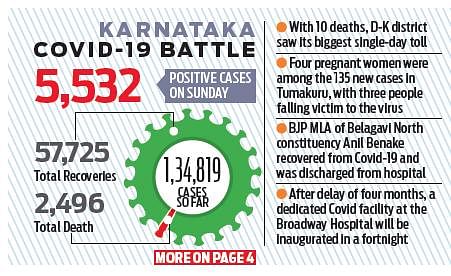 However, the state’s main worry lies in the spiralling number of cases that are currently under treatment — also known as active cases — which has shot up to 74,950 from 73,219 on Saturday, with the day’s addition of 1,371 to the tally.

Lately, Karnataka has started improving its score on the recovery front. After adding over 3,000 discharges per day for three days between July 30 and August 1, which was much lower in the days prior to that, the state saw a refreshing 4,000-plus patients discharged on Sunday. The state’s recovery rate had faltered since the beginning of July, when it was 41.94% and fell to the month’s lowest at 35.29% on July 20. But after that, there has been consistent improvement till Sunday (42.81%).

Karnataka on Sunday continued to be at No. 2 spot on the number of active cases among states in the country, with the total at 74,950, after Maharashtra (1,48,537), and followed by Andhra Pradesh with 74,404 active cases.

The state reported 5,532 new positive cases on Sunday, taking the tally to 1,34,819. With 84 more deaths on Sunday, the toll now stands at 2,496. Among the new deaths, 19 had ‘contact under tracing’ while others were diagnosed with SARI and ILI. A majority of them had comorbidities. As per official data, the share of asymptomatic patients has increased to 78.4% while symptomatic patients account for 21.3% as of August 1.

Now we are on Telegram too. Follow us for updates
TAGS
Karnataka COVID 19 Karnataka Coronavirus