Recovery data may not give real pic: K Sudhakar

BENGALURU: Even as Medical Education Minister Dr K Sudhakar has been tweeting about the substantial upswing in Karnataka’s Covid-19 recovery rate, at 42.81%, public health experts and epidemiologists have raised questions on the entire process of calculating the recovery rate, and said that focussing on this is not right during a pandemic. Instead, they say the focus should be on the level at which recoveries happen — serious, medium, mild or with co-morbidities.

According to experts, currently, recovery rate is calculated comparing the total number of discharged patients with the total number of Covid-positive patients as denominator. “This is converted into percentage and shown as recovery rate of a certain state or region, and is done even in central data. However, it is not right,” explains a senior virologist, on condition of anonymity. He says, “Recovery rate plus mortality rate should add up to 100. But if you take the case of Karnataka or any state, this doesn’t come across when we analyse data,” he explained. 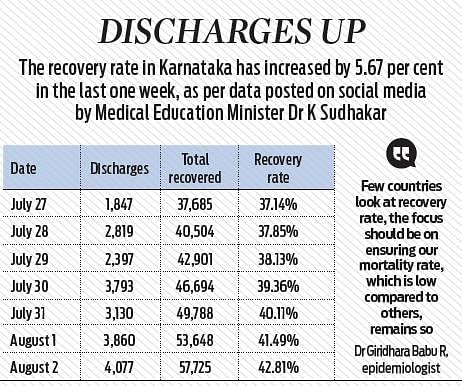 He says the number of active patients should not be considered as recovered, as their outcome is not known yet. Meanwhile, health experts claim that recovery rate is improving because of the government’s revised discharge policy. According to this, there is no need to test mild and moderate cases before discharge, so if a set of patients is admitted with mild symptoms, or is asymptomatic, then on the 10th day, the discharge numbers would be high.

Also, those in home quarantine are to remain isolated for 17 days, after which they are considered recovered, but now they are considered recovered if they show no symptoms in 10-14 days. Confirming this, a senior public health expert says, “Recovery rate is misleading information.” He explains that more than 90% of people are asymptotic or mild. So when they are said to have “recovered”, it just means it’s been 10 days since diagnosis and they have shown no clinical symptoms for three days. “Nearly 90% infected patients recover.

What’s more important is the percentage of clinically symptomatic (requiring hospital admission) patients recovering or dying. How many days it takes them to recover etc needs to be calculated,” he explained. Data compilation, according to senior epidemiologists, is not uniform in any part of the country. However, Dr Giridhara Babu R, a senior epidemiologist on the technical advisory committee to the government, says the focus should not be on recovery rate but on mortalities.

“Ultimately, 80% of them will recover. We should look at deaths per million, as it shows the burden of infection on society. Very few countries actually look at recovery rate, the focus should be on how to ensure that our mortality rate, which is low compared to others, remains so and how many lives we save,” Dr Giridhara Babu said. However, Dr M Madan Gopal, former principal secretary, health department, said, “It is a good sign to focus on recovery rate as this will instil confidence in the public, and there is a lot of panic. We are doing more testing and also checking viral load, which gives us accurate results.”

Now we are on Telegram too. Follow us for updates
TAGS
Recovery data COVID 19 Coronavirus Karnataka K Sudhakar