BENGALURU: As per a performance report prepared by the Covid War Room on Karnataka, the state has exceeded its RT-PCR testing target, with several districts testing over and above their target.
The report includes all districts, except Bengaluru, and took into account testing figures of the past three days. The RT-PCR testing percentage of 29 districts is 131%, with 27,090 samples tested on a daily average, against a target of 20,604 samples.

For example, the percentage of RT-PCR tests done in Uttara Kannada stands at 446%, which is testing an average of 891 samples a day, though its capacity is 200. Chitradurga has a testing percentage of 455%, testing 682 samples a day, as opposed to its target of 150. Mandya’s figure stands at 315%, testing 630 samples but with a capacity of 200 a day. Only Dakshina Kannada and Hassan slipped below 100 per cent, clocking 50% and 90% respectively.

Explaining how labs are testing beyond their capacity, Dr C N Manjunath, nodal officer for testing in the state, said, “Labs are doing three shifts instead of two, and have procured high-volume equipment. Also, 2-3 labs are added every week and there are 105 private and government labs in the state. All private medical colleges have been told to set up RT-PCR labs as well, which is the gold standard in Covid testing.”

“RAT is meant for community and door-to-door testing, field level testing and for suspect Covid deaths, where test results can be produced quickly and the body disposed of. This test is meant for high-risk exposure and symptomatic groups. If a symptomatic person tests negative, a repeat test is done with RT-PCR, and if an asymptomatic person tests negative, there is no follow-up test,” added Dr Manjunath, who is also director of Sri Jayadeva Institute of Cardiovascular Sciences and Research.

IAS officer Shalini Rajneesh, in charge of testing, said the government uses Rapid Antigen Test for emergencies, symptomatic cases and family members of Covid-positive patients. The state policy aims at a healthy balance of both RT-PCR and Rapid Antigen Test. “Enhancing testing capacity has been the focus of our government and we are steadily improving our testing numbers. We started with two labs in February and now have 100 labs across the state. We had set a target of at least 50,000 tests per day,” said Dr K Sudhakar, Minister for Medical Education.

“The RAT number has reduced a bit in the past 2-3 days due to heavy rain in several parts of the state. Since a majority of RAT are conducted using mobile vans, we have not been able to meet the target,” Sudhakar added. 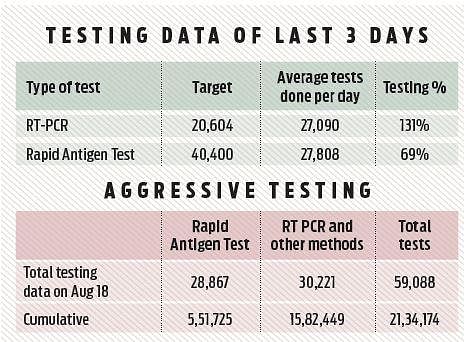 Now we are on Telegram too. Follow us for updates
TAGS
Covid War Room Karnataka COVID 19 RT-PCR