While the recovery rate has shot up to 68.23 per cent, the mortality rate has dipped to 1.68 per cent, according to the state war room.

BENGALURU: Karnataka seems to have taken a better turn on the COVID front, despite recording 7,000-8,000 new cases daily over the past few days. While the recovery rate has shot up to 68.23 per cent, the mortality rate has dipped to 1.68 per cent, according to the state war room.

The recovery rate was a poor 35.29 per cent on July 20. From one of the worst recovery rates among the states almost two months ago, Karnataka has made a turnaround, almost equalling the national recovery rate of 68.45. 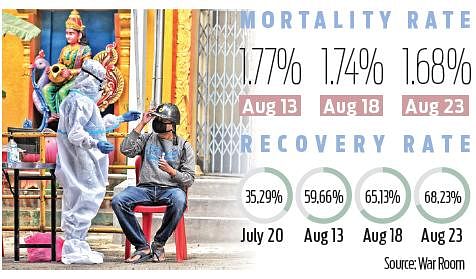 But the positivity rate has been increasing, from 3.32 per cent on July 5 to 11.50 per cent on Sunday evening. This compares poorly with the national average of about 7 per cent. Dr Giridhar Babu, head of Lifecourse Epidemiology at the Public Health Foundation of India, and member of the Karnataka expert committee in the COVID task force, says, “Test positivity rate will increase as a function of increasing proportion of population getting infected and fewer tests done.

To decrease test positivity, it is important to expand testing following a syndromic approach for case detection—identifying and treating a syndrome with minimal or no requirement for lab support.” The state has conducted 24,13,951 tests, of which 6,61,791 are rapid antigen tests and 17,52,160 RT-PCR tests.