Large and Medium Scale Industries Minister Jagadish Shettar said the company has sought 300 acres of land and some concessions.

HUBBALLI: At a time when the economy is in slowdown, the ‘Invest Karnataka’ event, an investors’ conference held here on Friday, saw investment proposals totalling Rs 72,000 crore, mostly in North Karnataka, by 51 companies. This is expected to generate a whopping 90,000 direct employment opportunities in the region.

Most of the proposed investments is coming from one company — Rajesh Exports Limited — which has signed a memorandum of understanding to invest Rs 50,000 crore for manufacturing of electric vehicles and Lithium-Ion cells and batteries at Dharwad. This is expected to generate employment for 10,000 people. The company will invest in a phased manner over the next 15 years.

Large and Medium Scale Industries Minister Jagadish Shettar said the company has sought 300 acres of land and some concessions. Since it is a high-value investor, the State Government is ready to consider the demand. However, a final decision will be taken by the high-power committee headed by CM B S Yediyurappa, he added. 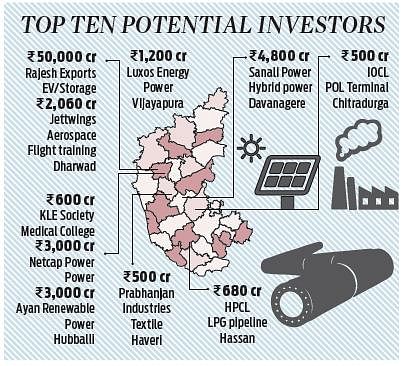 Among the Tier-II cities, Hubballi-Dharwad have managed to attract investment of Rs 60,000 crore, which nearly 85% of the total investment proposed. Apart from electric vehicles and storage, companies have evinced interest in setting up power generation units, flight training academy, information technology and other sectors. Since the government has pooled a huge land tract, it will not be an issue for investor at all, said Industries Department Principal Secretary Gaurav Gupta.

Some sections in Belagavi which had opposed holding the meet at Hubballi seem to be satisfied with the quantum of investment the city attracted. As many as 11 industries have proposed to invest Rs 1,006 crore. Aravind Melligeri, developer of the aerospace SEZ Aequs Aerospace, was instrumental in marketing North Karnataka by ensuring investment of another Rs 2,000 crore for the toy cluster at Koppal.

The other city which attracted high investment was Kadechur industrial area in Yadgir which was favoured by most of the pharmaceutical companies from Telangana and Andhra Pradesh. Ten companies have assured investment of Rs 798 crore. Other cities which attracted investments at the meet are Haveri, Bidar, Vijayapura, Chitradurga and Davanagere.

Now we are on Telegram too. Follow us for updates
TAGS
Invest Karnataka