BJP rules at the Centre and also in Karnataka and Goa, yet the Mahadayi river issue continues to fester.

Relentless attempts made by successive governments in the state since 1980 for the diversion of Mahadayi river (called Mandovi in Goa) waters to Karnataka have not yielded results yet, although the Mahadayi Water Disputes Tribunal (MWDT) award came in August 2018.

At a time when Karnataka has geared up to launch Kalasa-Banduri project (part of Mahadayi project) to divert its share of drinking water to Malaparabha through Kalasa-Banduri nala, the Centre is unwilling to issue a gazette notification of the tribunal’s award to allow the state to start the work.

Despite appeals from all quarters in North Karnataka, neither the government nor parliamentarians and Union ministers from Karnataka are exerting pressure on the Centre to clear the way for the project.

Union Minister for Forests, Environment and Climate Change Prakash Javadekar is apparently not taking a firm stand on whether to allow Karnataka to start the work.

He recently wrote a letter to Karnataka Home Minister Basavaraj Bommai stating that the state government could start its work on the Kalasa-Banduri project. But he said the government would have to take environment clearance from the Centre. Several top officials from Karnataka and experts questioned the logic behind Javadekar’s letter to the Home Minister and said Javadekar would have, instead, written to Chief Minister B S Yediyurappa or the Irrigation Department directly if he was really keen on allowing Karnataka to start the work.

At the same time, Javadekar met a delegation from Goa, headed by its Chief Minister Pramod Sawant recently and reportedly promised them to protect the interests of that state with regard to the Kalasa-Banduri project.

Seemingly under pressure from Goa Governor Satyapal Malik, Javadekar even wrote to the Goa government, assuring it of safeguarding the lower riparian state’s interests.

In an interview with a local news channel, Malik went on to say that Goa suffered “injustice” and felt “cheated” with regard to the Mahadayi issue. “Sharing of Mahadayi water with others (Karnataka) for irrigation is unacceptable,” Malik added.

Opposition parties in Goa headed by Leader of Opposition in Goa assembly Digambar Kamat are demanding a special session of the state legislature to discuss Mahadayi and exert pressure on the state and the Centre against releasing “even a drop of water from the Mandovi to any other state”.

Kamat told The New Indian Express that Mahadayi is the lifeline of Goa and not only Congress leaders in Goa, but all the people of Goa are against the diversion of its water to Karnataka or any other state. “I am urging the Goa government to hold a special legislature session to discuss Mahadayi issue, but it is not ready for it,’’ he said.

However, Karnataka, Goa and Maharashtra, the three stakeholders in the Mahadayi project, have already moved the Supreme Court challenging the tribunal’s final award and each has demanded a greater share of water.

Noted advocate M B Zirli, who was a member of Karnataka’s legal team handling the Mahadayi case in the Supreme Court until recently said the state government is not at all serious about the issue. “Inspite of attempts made by Goa to deprive Karnataka of its share of water, the state (Karnataka) government did not even hold a meeting of its legal team or experts. Nor is it keen on getting the Mahadayi case expedited in the Supreme Court. The state government has failed to insist on the court for an early hearing of the case,’’ Zirli said.

Sources said the state government has not named its new legal team to take up the case after Yediyurappa formed his government.

The Mahadayi project was first mooted by the state government in 1960 with initial plans to divert water to generate power.

According to sources, a committee headed by late S R Bommai (then Opposition leader in assembly) was formed by then Chief Minister Gundu Rao in 1980 to get the project implemented. However, the project which failed to take off was revived once again in 1983 by the Ramakrishna Hegde government following a proposal from Bommai, who was the Revenue Minister then.

This time, Bommai proposed the diversion of Mahadayi water only for drinking water purposes. Attempts were again made by governments headed by Bommai and Veerendra Patil in 1988 and 1989 respectively to get water diverted but in vain.

At last, the state’s attempts yielded results when the Atal Bihari Vajpayee government at the Centre gave its nod in 2002 to divert water from Mahadayi to Malaprabha river. Even as Karnataka launched works on the Kalasa-Banduri project (part of Mahadayi project), the Goa government got it halted mid-way by moving the Supreme Court.

By then, Karnataka had already completed 90 per cent of the Kalasa canal construction. The court set up the Mahadayi Water Disputes Tribunal (MWDT) in 2010 and it finally halted the Mahadayi project. After a marathon hearing that stretched from 2010 to 2018, the tribunal gave its final award on August 14, 2018.

State’s other disputes with neighbours

Mekedaatu reservoir
The multi-purpose project in Kanakapura of Karnataka on the Cauvery river has received the Central Water Commission’s nod. But Tamil Nadu has objected to it, raising concerns over violation of Cauvery tribunal order. The project aims at solving the drinking water problems of Bengaluru and Ramnagara districts and producing 250-400 MW hydroelectricity by storing excess water that flows into the Bay of Bengal.

Border dispute
Karnataka has been in a deadlock with Maharashtra over merging some 800 Marathi speaking villages in Belagavi district with the neighbouring state. The decades-old dispute is fuelled by pro-Kannada organisations and the Maharashtra Ekikaran Samiti.While Maharashtra has been insistent on claiming the territory, Karnakata has stood its ground of not ceding any land.

Markandeya river
Karnataka’s initiative to build a reservoir across the Markandeya river has been stalled by Tamil Nadu in the Supreme Court. The proposed reservoir envisages to supply drinking water to the parched areas of Kolar, Bangarpet and Malur. Tamil Nadu has been opposing the move alleging it will have an impact on the Pennaiyar river’s downstream flow.

Boundary demarcation
Regularisation of the border between Karnataka and Andhra Pradesh in Ballari district was necessitated thanks to illegal mining in Obalapuram - a cluster of six mines of which three are owned by former BJP leader Janardhan Reddy. In May 2018, following a Supreme Court order, a team of the Survey of India took up border survey in Ballari to demarcate the line between the two states.

Krishna water
Maharashtra and Karnataka jointly opposed Andhra Pradesh’s application seeking a relook at the Krishna Water Disputes Tribunal award in September 2019. Andhra Pradesh’s proposal to include Telangana as another riparian state and reallocate water has been contested by Karnataka and Maharashtra. The two upper riparian states have insisted that since Telangana was carved out of Andhra Pradesh, its alloction of water should be awawrded from Andhra’s share. 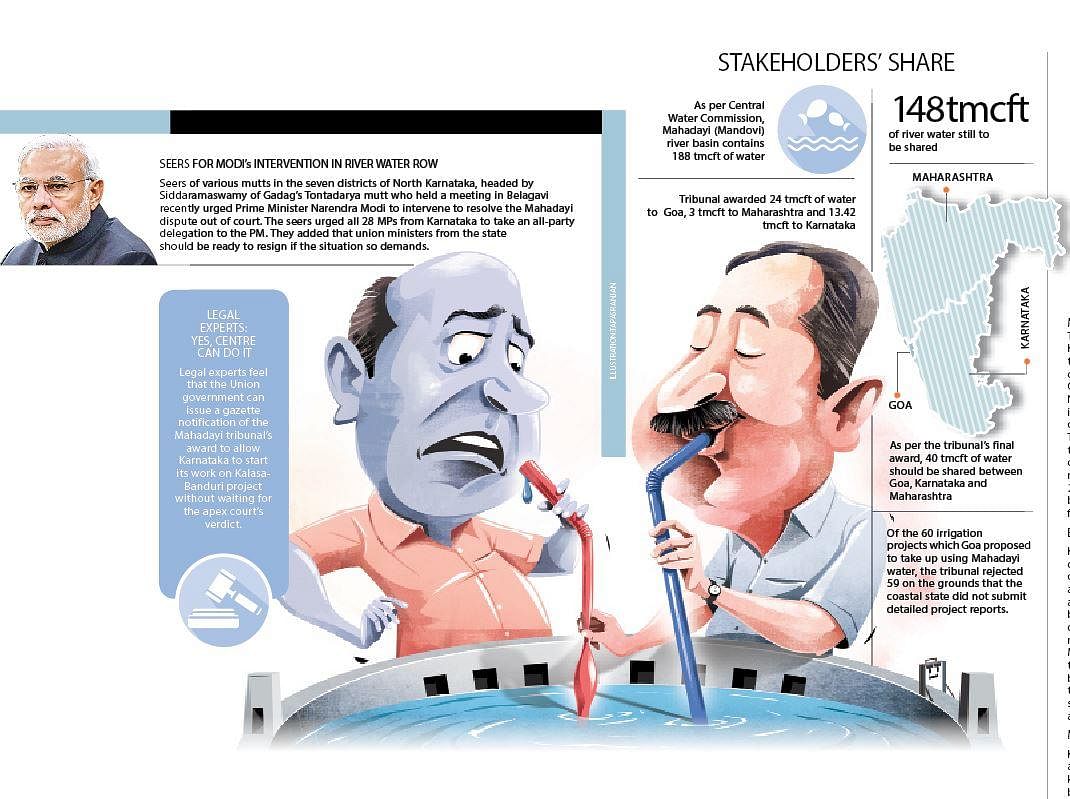