18.5 lakh in India didn’t get access to abortion facilities in lockdown

In some instances, where the pregnancy exceeded 20 weeks, the Karnataka High Court, gave relief during the lockdown.

BENGALURU: A 12-year-old girl from a poor, illiterate tribal family of rural Karnataka, who got pregnant after a sexual assault, had to go back and forth between medical facilities and the court to terminate her pregnancy during the lockdown. She is not alone. In the last three months, at least 18.5 lakh women across the country did not have access to abortion facilities. A survey conducted in 12 states by Ipas Development Foundation, which collaborates with the Ministry of Health and Family Welfare (MoHFW) to improve the availability of comprehensive contraceptive care, showed,

“As many as 18.5 lakh women had no access to abortion facilities due to which several of them had delayed abortions, some went beyond the gestation period and others were forced to deliver,” said Vinoj Manning, Executive Director, IDF.

Agreeing that several cases of forced sex-related abortions had come up during the lockdown, Kushi Kushalappa, Head, Policy and Community Integration, Enfold Proactive Health Trust, said, “In Karnataka, too, there have been instances where minor girls could not terminate their pregnancies because hospitals or doctors refused to do so, despite the duration of the pregnancy being less than 20 weeks. This is in violation of the Medical Termination of Pregnancy Act, 1971, Section 3 and 5.”In some instances, where the pregnancy exceeded 20 weeks, the Karnataka High Court, gave relief during the lockdown. 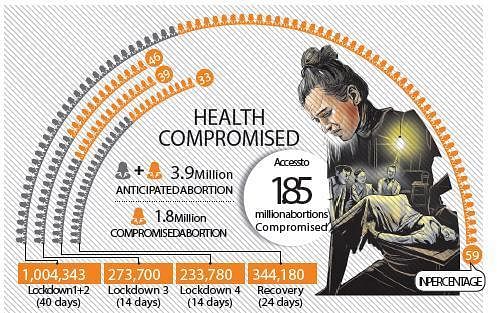 At a webinar organised by Pratigya Campaign on Women’s Sexual and Reproductive Health Services During the Pandemic, Richa Salvi of the Family Planning Association of India, who runs safe abortion clinics in several states, said, “We saw 1,200 medical abortions and 360 surgical abortions during the lockdown. We noticed many women could not travel to our clinics, some came weeks after the confirmation and many didn’t even reveal they were pregnant because of confidentiality issues.”

According to volunteers, minors and caregivers are reluctant to report cases in the current scenario as they are concerned about the minor being taken to public places like police stations and hospitals. “With trials in sessions courts at a complete standstill, prosecutors were concerned that with indefinite extensions, prosecution witnesses may stop supporting the case during trial and turn hostile,” expressed Kushi.Vivek Malhotra, CEO, Population Health Services India, told TNIE, “During the lockdown, there was a shortage of contraceptives, which are usually bought once a month in rural areas and condoms which are weekly purchases. Now there has been a big demand for abortion kits,” he said.

Now we are on Telegram too. Follow us for updates
TAGS
Abortion lockdown Karnataka