This despite experts earlier pointing out that online classes can affect motor and social skills in young children.

BENGALURU: Just days after Primary and Secondary Education Minister S Suresh Kumar announced that no online classes will be conducted for students of Classes 1 to 5, an online petition, “We support online classes”, is gaining traction and already has 17,000 signatures of parents of pre-primary and primary schoolchildren.

The campaign is opposed to Minister Suresh Kumar’s Wednesday’s announcement that schools will have to stop online classes for children in LKG/UKG and those in Classes 1 to 5 in recorded or any other form until a newly-formed 11-member committee takes a decision on it. 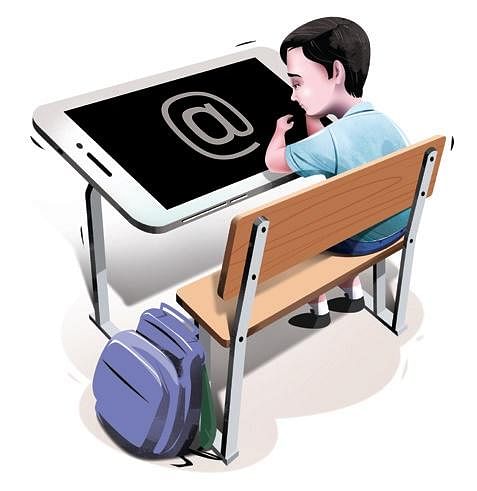 The parents in support of online classes point out that it helps kids stay focused on studies without whiling away their time or playing addictive video games in the absence of regular classes, even as parents are working from home. This despite experts earlier pointing out that online classes can affect motor and social skills in young children.

Software engineer Ritu Sarma, mother of a Class 3 student in a private school in Whitefield, said, “The classes were just for four hours and my daughter enjoyed attending it. The module the school had developed was very good and less burdensome as well. It was not just classes, they even had dance and musical sessions which kept my child engaged and energetic. Now, with it being stopped, she is not happy and we are disappointed as well.”

Ritu Sarma said she had heard that online education was not good for pre-primary and primary schoolchildren psychologically. “But neither is Covid-19, nor is staying at home under a lockdown, which have prevented schools from reopening. These are unprecedented times and this is the only way for our children,” she felt.

“It’s better than kids roaming around infecting themselves or being in front of TV sets or on mobile phones, getting bored. In fact, since these online classes have started, we have seen a marked positive energy in the kids,” she said.

Leenapriya Ridhima, the mother of a Class 2 student who studies at a school in Varthur, said, “It’s understandable not having online classes for pre-primary schoolchildren. But students of Class 1 and above can have it. My child would wake up in the morning all charged up and looking forward to the online classes. Now that it’s stopped, he has nothing to do. The classes could help them learn and keep them occupied. They already have had a long break. We want the government to restart online classes”.

More from Karnataka.
Now we are on Telegram too. Follow us for updates
TAGS
online classes