BENGALURU: The stage is set for Karnataka to push for regional air connectivity for the common man to avail flight services at affordable costs to travel between tier -II and III cities within the region.

According to Synergia Foundation, a Bengaluru-based strategic think-tank, Karnataka has a huge potential with a long list of airports to be developed under RCS. It listed 21 potential airports that can be brought under RCS including New Bellary Airport, Bidar Air Force Station, Vijayapura, Chikkamagaluru, Hassan, Shivamogga(see graphic).

Chief Secretary TM Vijay Bhaskar said, “We want HAL Airport for short-haul flights. Domestic flights up to a distance of 500km can be operated from here to benefit air travellers who want to reach, say, Mysuru by flight.”

Currently, 14 flights are operated by airlines from Belagavi, including 10 under UDAN-3. By April, at least 20 flights are expected to be operated from Belagavi. Last month, TruJet launched three flights connecting Belagavi with Tirupati, Mysuru and Hyderabad under UDAN-3 and added another to Kadapa on Sunday. TruJet has been allotted five routes under UDAN-3. Star Air, owned by Sanjay Ghodawat, is operating three flights under UDAN-3 connecting Ahmedabad, Indore and Mumbai to Belagavi. As per UDAN-3 bidding, Star Air is expected to connect six more destinations in the next few months.

Mysuru Airport, which started with a Mysuru-Chennai flight under UDAN, handled 99,991 passengers between April and December in 2019 against 33,547 passengers in the same period in 2018, a whopping 198% growth in traffic. Mysuru is also connected with Belagavi, Kalaburagi, Hyderabad, Chennai, Goa and Kochi.

The Hassan Airport project took wings after two-and-a-half decades after MoCA chose it under UDAN, but work is still in progress. The Centre directed acquisition of additional of 200 acres for the project. The district authority had acquired 536 acres in 2007 near Bhuvanahalli on Hassan’s outskirts.
Kalaburagi Airport, spread across 742 acres and constructed at a cost of over Rs 1,200 crore under UDAN, became functional on November 22, 2019. Star Air was the first to start operations between Bengaluru and Kalaburagi. Initially, Star announced three-days-a-week service between Bengaluru and Kalaburagi, but has started daily services from February 15. Alliance Air is plying between Mysuru and Kalaburagi via Bengaluru every day, indicating a robust demand.

“It’s an overwhelming public response at both airports. Star Air is planning flight services between Kalaburagi and Tirupati and Kalaburagi and Hindon (New Delhi) from March. The date is not yet finalised,” he said. Karnataka has provided Rs 450 crore for creating infrastructure at Kalaburagi Airport and Rs 3 crore every year to GMR for Bidar Airport.

Two years after Hubballi airport was brought under UDAN, schedules have increased to 11 from just two, including those to Delhi (Hindon), Mumbai, Bengaluru and Chennai, and they are likely to increase over the next two months. It carried 3.36 lakh passengers in the first three quarters of the financial year 2019-20 against 3.21 lakh in the corresponding period of the previous one. Over 5 per cent growth was noticed in aircraft movement in the same period. 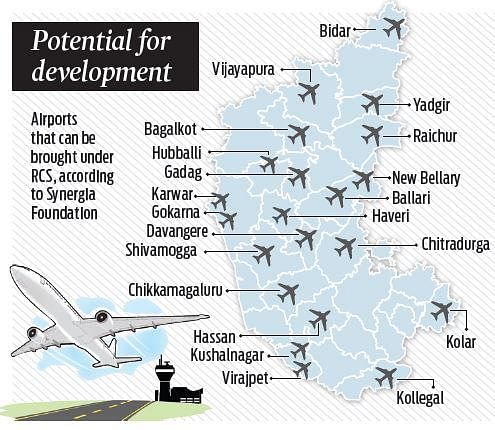 Stay up to date on all the latest Karnataka news with The New Indian Express App. Download now
TAGS
UDAN

Coronavirus crisis has burst the bubble in which sportspersons exist: England's Mark Wood

Over 29 million hydroxychloroquine doses bought have come from India: Trump after retaliation threat