The state government started testing secondary contacts of Covid-19 patients to check the virus spread, leading to an increase in the number of tests as well as cases. While cases show a consistent spike, testing has seen a slight downward curve. Also, the number of samples awaiting results is piling up. The State COVID-19 war room daily analysis for May 10 revealed that results of 8,119 samples were still to come out as on Saturday.

Ever since, Karnataka has steadily increased the number of samples tested per day to its highest of 5,168 on May 3 —with an exception of April 27 when only 2,721 samples were tested. But since May 3, the numbers have seen a slight but steady decline.

Karnataka, however, has tested 1,07,311 samples till date with a positivity rate of 1/100 tests, in line with Kerala and Andhra Pradesh. Karnataka’s testing rate as on May 10 stands at 1,687 per million population as against Andhra Pradesh’s 3,330 or Tamil Nadu’s 2,423. But it fares better than Telangana’s 551 per million population or Kerala’s 1,012. 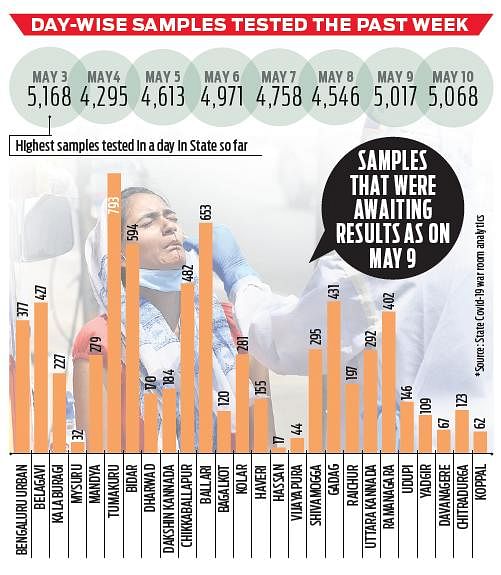 More from Karnataka.
Now we are on Telegram too. Follow us for updates
TAGS
Coronavirus COVID 19 Coronavirus lockdown