Bengaluru Urban, Bengaluru Rural and Mysuru districts have been classified as Red Zones by the Central government.

BENGALURU: As economic activities in the state are restarting slowly after easing of lockdown norms, the Karnataka government on Monday asked the Centre to do away with district-wise zoning and restrictions, and to focus only on containment areas.

“We propose to do away with district-wise Red, Orange and Green zones. Only containment zones should be identified and strictly cordoned off. 50 to 100 metres around known clusters may be declared as containment zones,” said Chief Minister BS Yediyurappa during his 20-minute presentation to Prime Minister Narendra Modi, who held a marathon video-conference with chief ministers to review measures taken to contain the spread of COVID- 19 and restart the economy.

Bengaluru Urban, Bengaluru Rural and Mysuru districts have been classified as Red Zones by the Central government.

Areas falling under the zone will have stricter restrictions as compared to Orange and Green zones. But the state is keen to do away with all restrictions in Bengaluru and other big cities.

“Commercial activities, including public transport, should be allowed in non-containment zones, as this would help the state boost economic activities and come out of economic crisis” the CM said.

The state should be allowed to resume business activities in standalone establishments while continuing with restrictions on malls, cinemas, diners and setups with central air-conditioning.

The CM called for a nationwide testing guideline to determine a minimum number of tests to be carried out per million population in each state. “We must only test those with symptoms and need hospitalisation,” he said. 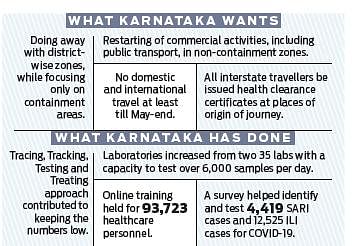 The CM said that only those with severe symptoms should be hospitalised, while people over 60 years and below 10 years should be advised to remain indoors. People with comorbidities should be protected with utmost care.

More from Karnataka.
Now we are on Telegram too. Follow us for updates
TAGS
coronavirus BS Yediyurappa COVID 19