People returning from other states are taken to quarantine centres and swab samples are collected for tests.

BENGALURU: With a huge number of migrant workers returning to their hometowns after the Lockdown 3.0 norms were eased, the fight against the Covid-19 pandemic is now being taken to the semi-urban areas and villages too. The novel coronavirus seems to be making inroads into the state’s hinterland which was hitherto considered safe. 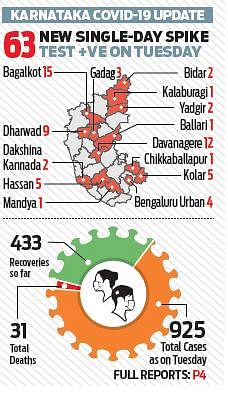 Over the last few days, several people who had returned to their villages from Gujarat, Maharashtra and Rajasthan — the epicentres of Covid-19 — have tested positive. On Tuesday, the state recorded the single-day highest of 63 cases, which included cases from villages in Hassan, Shivamogga and Yadgir. All three districts were in the green zone earlier. A massive effort, involving ASHA workers, Gram Panchayat officials and others from Revenue, Police and Education departments, is under way to prevent the virus’ spread in villages.

‘Can’t say virus has entered villages as of now’

While all those who tested positive were placed in quarantine, sources said many also crossed the porous state borders and mixed with the villagers, posing a risk to others. Sources said ASHA workers, with the help of villagers, are doing their best to identify such people and place them in home quarantine. Schools and hostels in villages are being converted into quarantine facilities.

“We have been told to keep the premises ready to accommodate those coming in from other states and senior officers have issued directions to ensure that people in quarantine are not allowed to move out,” said the headmaster of a government school in Kalaburgi district. “Villagers may be naïve, but they are also more vigilant. They will not allow anyone from outside to enter without being tested,” stressed Primary and Secondary Education Minister S Suresh Kumar, who is also the state’s spokesperson on Covid-19 matters. “As of now, we cannot say that the virus has entered villages. All those who tested positive are in quarantine facilities,” he pointed out.

People returning from other states are taken to quarantine centres and swab samples are collected for tests. “All districts are ready with facilities to quarantine and test the people coming from outside. Apart from the local administration, even local political leaders were taken into confidence to create awareness,” the
minister said. “There is always an element of risk, but we had to take a decision and send them home. It is being done in all the states,” he added.

More from Karnataka.
Now we are on Telegram too. Follow us for updates
TAGS
Karnataka COVID 19 Coronavirus