Unexpected high-intensity pre-monsoon showers and the lockdown have turned out to be a perfect mixture for an increase in both the quantity and quality of water in the Cauvery basin.

BENGALURU: Unexpected high-intensity pre-monsoon showers and the lockdown have turned out to be a perfect mixture for an increase in both the quantity and quality of water in the Cauvery basin. The Cauvery, which rises at Talacauvery in Kodagu district, has many tributaries including Harangi, Hemavati, Kabini, Bhavani and Lakshmana Tirtha. It flows through three States — Karnataka, Tamil Nadu and Kerala — before emptying into the Bay of Bengal.

According to the Karnataka State Natural Disaster Management Centre, the normal average rainfall during the pre-monsoon period (from March 1) should have been 76 mm, but the actual rainfall is 83 mm, which is 8% more than the normal. There was good rainfall, especially in Mandya and Mysuru region.

Prof T V Ramachandra, Centre for Ecological Sciences at the Indian Institute of Science, told TNIE that this time there was good rainfall and that fresh water might have diluted the river and the basin. “This has played an important role in change in quality of water. Also, lockdown has brought down the contamination,” he said.  Due to the lockdown, industrial effluents and other factors causing water pollution, have come down.

Senior environmentalist A N Yellappa Reddy said the lockdown had played an important role, besides the high-intensity rainfall. “Earlier, industrial effluents, untreated sewage water especially from hotels, resorts and homestays would enter the river basin, polluting it. Due to the lockdown, all industries and the tourism sector were shut and the chances of chemicals entering the river were less. Water is now better, tastes better,’’ Reddy said. 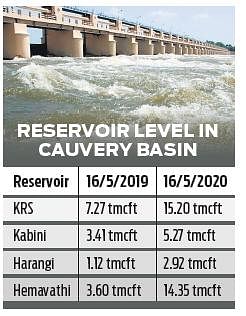 Water activist Vishwanath Srikantiah said that at present, Bengaluru is getting water not just from KRS, but also Kabini. “I have noticed that the water has become a little soft and there is variation in taste. Less pollution is one of the reasons,’’ he said. In Bengaluru, Vrushabhavathi Valley is also getting cleaner. This joins Byramangala Lake near Bidadi and then flows towards Sangama. Byramangala Lake, which froths like Bellandur, is seeing less frothing with industries shut during lockdown.

Stay up to date on all the latest Karnataka news with The New Indian Express App. Download now
TAGS
Cauvery river