But health department officials deny claim, say pattern does not fit into WHO guidelines

BENGALURU: Tracing the travel history of passengers coming in from other states has become messy as several of them have entered Karnataka without registering on the Seva Sindhu app and avoiding checkposts along the border. Also, the state health department does not have any data on them. Health Minister B Sriramulu said, “We have data only of those who have registered on the app. But some have entered the state without proper checks.” Epidemiologists suspect that such cases might have triggered the community spread, though state and central governments continue to deny it.

Dr John Jacob, a virologist at CMC, Vellore, said, “It doesn’t matter what the state gover nments are claiming, but the community spread has definitely occurred. We have to now start educating people on what they have to do when symptoms occur and how to isolate themselves or who to contact, etc.” The statistics from the State Covid War Room revealed that 2.5 lakh people of around 1.4 lakh families have been approved to come into the state as on May 16. 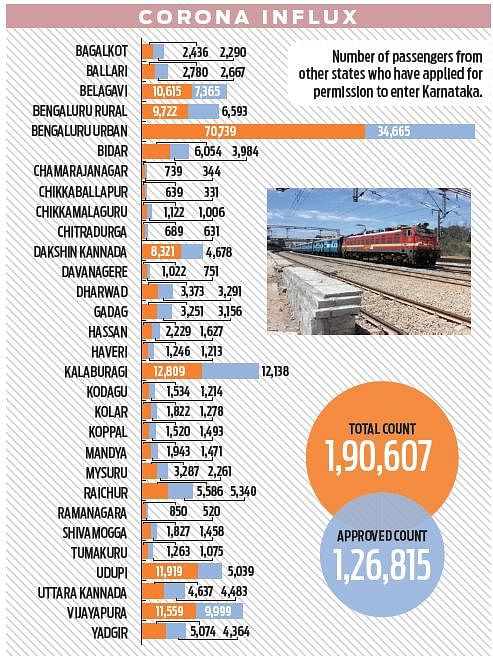 But it is alleged that many have entered without the mandatory quarantine. Munish Moudgil, heading the State Covid War Room, however, said, “No, that’s not true. All have been handled. Interstate arrivals practically started on May 6 and from day one checkposts have been set up and follow-ups have been done. Later, IT-based systems too were put in place.” Parashuram, another epidemiologist from Bengaluru, who is looking after Covid cases in East Benglauru said, “A detailed look reveals that community transmission has happened in the state, especially in Bengaluru.

The indication is when you start seeing cases in green zones, tracing travel history becomes an issue and the secondary contacts start getting infected in large numbers.” But Dr B Vijendra Chief Health Officer, BBMP, said, “There is no community transmission as per WHO guidelines.”

More from Karnataka
Now we are on Telegram too. Follow us for updates
TAGS
community spread Karnataka COVID 19 Coronavirus