130 fresh cases were reported on Sunday with 100 of them coming from Maharashtra returnees.

BENGALURU:  In just nine days after May 15, Karnataka added 1,000 cases to cross the 2,000-mark on Sunday. At least 130 Covid-19 cases were reported on Sunday. Majority of them, that is 100 people, were once again Maharashtra returnees.

The others — two people returned from Andhra Pradesh, one each from Gujarat, Rajasthan, Dubai, Telangana and the UK and the rest were residents of containment zones in their respective districts. This brings the tally up to 2,089 cases, including 654 discharges and 46 deaths. 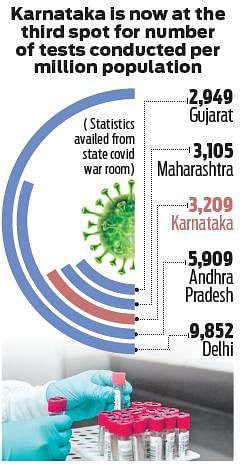 Minister of Medical Education Dr K Sudhakar in a tweet said, "After clocking 1 lakh tests on May 8, we have doubled the number of tests in 16 days. As on Sunday morning, we conducted 2.03 lakh tests across our 57 ICMR- approved Covid- 19 testing labs."

As many as 23 cases are from Udupi with most people from Maharashtra. The others from Udupi are three patients living in containment zones, two whose contacts are being traced, one each from Dubai, UAE and Telangana.

More from Karnataka.
Now we are on Telegram too. Follow us for updates
TAGS
COVID19 Coronavirus Karnataka COVID cases Karnataka corona measures