The State government must conduct two more rounds of sero survey - one in December and another in March - to determine the extent of the spread of Covid-19, experts have suggested.

BENGALURU: The State government must conduct two more rounds of sero survey - one in December and another in March - to determine the extent of the spread of Covid-19, experts have suggested.

“At least two more rounds of survey have to be done to see the changing trend of the population response to SARS CoV-2 infections in the months after the first round,” said Dr Giridhara R Babu, senior epidemiologist and advisor to the state Covid technical committee. 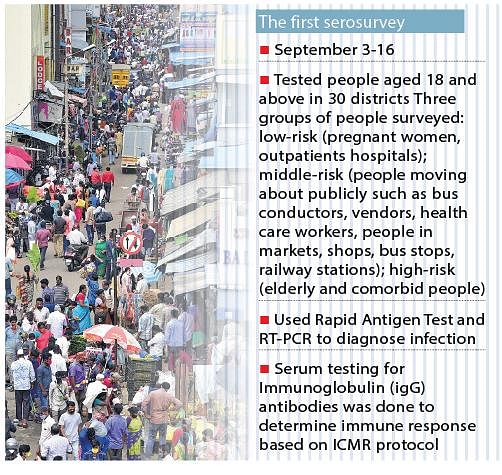 A sero survey is a population-wide test of blood samples of randomly selected people across ages and regions to look for antibodies against a specific pathogen.

The results indicate how much of the population is/was likely infected and how many have recovered and can help shape strategic decisions.

The first sero survey in September found that 1.93 crore people across Karnataka were infected by Covid or had the infection in the past.

Though the parameters for the second and third round would be the same as the first one, epidemiologists expect that since testing has increased, they may find changes in the virus’ behaviour.

A senior doctor from the technical committee said the state government is yet to approve subsequent sero surveys. He said that December would be ideal for the second round as it was just after Deepavali and coincided with the onset of winter when cases are expected to spike.

Two more surveys would be ideal to ascertain the cases-infection ratio.

“Several states have already done their second sero survey. It is in fact, delayed in Karnataka. However, we hope the government approves one as early as possible and makes arrangements to begin it in December,” the doctor said.

Meanwhile, epidemiologists have recommended district-level facility-based sentinel sero-surveillance to monitor the trend of infection in the long-term.

“A follow-up survey is planned to assess the extent and speed of transmission and evaluate the impact of containment strategies over time in the state,” Health and Medical Education Minister Sudhakar had said while releasing the report of the first sero survey.

Now we are on Telegram too. Follow us for updates
TAGS
Karnataka COVID 19 sero survey