Are we getting the better of COVID-19?

After a slow start to Covid-19 in Karnataka in March, which raised hopes of largely remaining unaffected in the months to come, the pandemic spread like wildfire.

Since then, until October 9, 6,90,269 cases have been reported, with the highest single-day addition being 10,947 on October 7. But among the active cases, only 873 are in ICUs. While the surge and the tally may raise concerns, the state Covid war room data points to a rising recovery rate and falling mortality and positivity rates, thanks to a big majority being asymptomatic.The state has the second highest number of active cases (1,20,929) after Maharashtra, which is the highest so far. 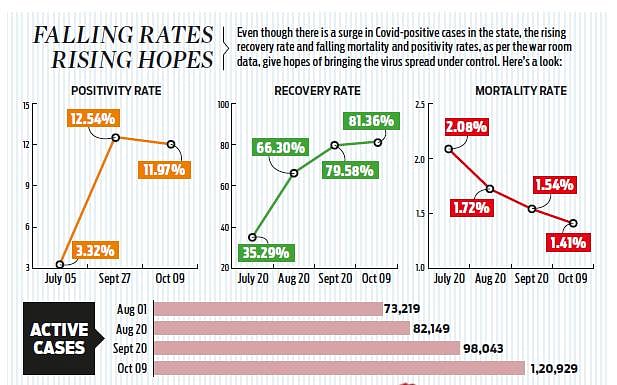 Experts point out that a high number of active cases is not bad as long as the long-term goal of reducing mortality rate is met. Dr C N Manjunath, Director, Jayadeva Institute of Cardiovascular Sciences and Research, and in charge of Covid testing, says active cases will increase as the positivity rate goes up, because of detection of more Covid patients, which is due to an increased number of tests -- 57,39,530, so far.“The positivity rate has been constant, between 12 and 13 per cent (11.97 per cent on October 9). Active cases will grow parallel to new cases. This helps in early isolation and will serve our long-term goal of reducing mortality,” he says.

But the state government’s aim, as mentioned by CM B S Yediyurappa, is to bring the mortality rate below 1 per cent. It stands at 1.41 per cent as on October 9 -- a steady decline from 2.08 per cent on July 20.The reason? The number of infected elders has reduced. “This is a good sign as infected elders face a greater risk of severity or death,” explains an intensivist from Victoria Hospital.

More tests due to more awareness, early diagnosis and treatment have helped reduce complications and mortality, says Dr Satish KS, member of the Covid death audit committee.“In March and April, when mortality rate was high, we analysed and found delayed diagnoses to be the cause. Now with awareness, people are getting tested earlier,” he says.Kalaburagi has shown the way. Its Deputy Commissioner V V Jyothsna says mortality rate is down to 0.8 percent in the district due to timely treatment.

On further improving the recovery rate, Medical Education Minister Dr K Sudhakar says the challenge is to get all primary and secondary contacts tested immediately. “If patients list their contacts and they voluntarily appear for testing, a lot of effort and government machinery can be saved and the spread can be arrested more efficiently. It also helps as we have more asymptomatic cases,” he said.

Dr Giridhar R Babu, Head, Lifecourse Epidemiology at the Public Health Foundation of India, says, “Avoiding the three Cs -- crowds, closed spaces and close contact settings -- and also following the three W’s -- wearing masks, washing hands and watching distance -- are important to avoid infection. The government should ensure that district-level review is done on time. We need to ensure mortality rate reduces in districts, and for that a district-level task force is a must,” he says.

There has been a steady rise in cases in Bengaluru, Uttara Kannada, Belagavi, Dharwad and Vijayapura, while it has been under control in Gadag, Haveri and Bagalkot in recent weeks.

Now we are on Telegram too. Follow us for updates
TAGS
COVID-19 Karnataka