It has now blocked 834 mail IDs registered with the Indian Railway Catering Tourism and Corporation (IRCTC) that have been hacked and used by touts to book tickets.

BENGALURU:  As part of the ongoing crackdown against touts who block railway tickets online and sell them at a premium, the Railway Protection Force (RPF) arrested two agents after raiding their properties in Bommasandra and Fraser Town on Friday.

It has now blocked 834 mail IDs registered with the Indian Railway Catering Tourism and Corporation (IRCTC) that have been hacked and used by touts to book tickets. A senior railway police officer said that the crackdown on touts started from January. “We have seized 3,713 train tickets worth nearly Rs 69,61,120 from January till date (September 18),” he said. In total, 93 cases have been registered and 111 touts arrested. 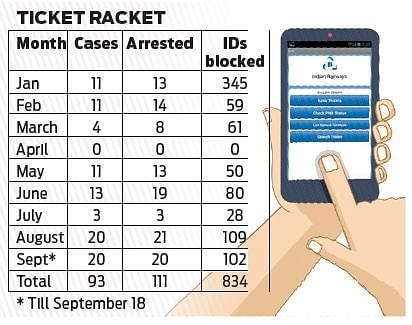 Explaining the modus operandi, a railway official said that the touts mastered the use of hacking software to obtain mail IDs of those who have registered with IRCTC. “The maximum number of cases booked -- 20 -- was in August and 1,310 tickets were seized,” he added.As per RPF data, most of the tickets seized (3,171) were those wherein the journey has already been undertaken by the passengers.

The railway cops involved in the raids have now tested positive for Covid-19, the officer revealed. This problem of booking tickets illegally has been plaguing Bengaluru for quite some time. In September 2019, a massive racket was unearthed after multiple raids by RPF in South Western Railway Zone wherein passengers were charged four to five times the ticket price by these touts.

The arrest of an individual, who fled to Odisha, revealed that he used Pakistani-based software for hacking applications. This led to the detection of 100 sellers of the software and developers across India and the unearthing of a racket in which around 25,000 hackers from the country were involved.

Now we are on Telegram too. Follow us for updates
TAGS
RPF Indian Railways