This village in Gadag district worships Bapu, follows his path

GADAG: A temple for Gandhi. That is how much Jakkali villagers revere the Mahatma. They literally worship him and his principles. And no wonder this village in Gadag district is known as Gandhi Gram.
The villagers worship Gandhi not only on October 2, his birth anniversary, but the whole year. The Gandhi temple, located in the government school premises, sees many devotees offering puja on a daily basis. And the schoolchildren pay obeisance to Gandhi before their daily prayer.

Jakkali fondly remembers the day when the Mahatma visited the village. It was March 3, 1934. People from far and near had thronged this little village to at least catch a glimpse of Mohandas Karamchand Gandhi, even if they could not listen to his speech. This chance encounter between the villagers and Gandhi, who would steer India to freedom and emerge as the Father of the Nation, left a lasting impression on them. 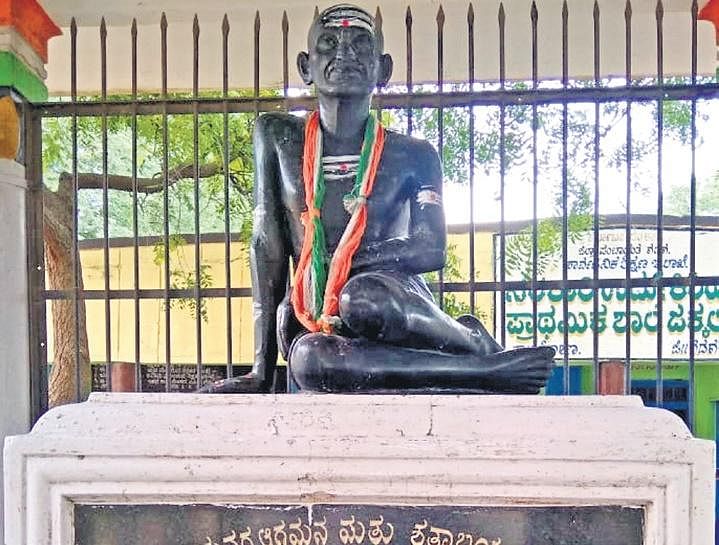 Each year, this village awaits October 2 with eagerness. Villagers offer flowers to Gandhi’s statue, while children participate in singing and speech competitions surrounding his life. This year, as schools are closed, they plan a symbolic function where two students from each class wearing masks, will celebrate the Mahatma and his teachings. It’s fascinating to learn Jakkali’s tryst with this icon.

It’s interesting to note that after Independence, many newborns in Jakkali were named after Gandhi as a sign of respect. Many others also started wearing dhotis made by charkha.In 1970, the villagers adopted a practice of worshipping Gandhi as god who had fought for the country’s Independence. Accordingly, artists Mallappa Kammar and Somappa Kammar crafted an idol and consecrated it in the temple built within the school premises.

Apart from celebrating Gandhi’s birthday, Jakkali’s residents also mourn January 30, Martyrs’ Day. When Gandhi was assassinated in 1948, artists fashioned a sandalwood statue and cremated it, an even attended by the entire village. A villager, Venkanagouda Kenchanagoudar, observed ‘mouna vrata’, a vow of silence for six months, on learning of Gandhi’s passing. Many undertook vows to wear only khadi, and to sacrifice footwear and eating sweets forever.

“Jakkali’s residents are fond of Bapu. We celebrate his birthday like Diwali. The sudden death of the Father of the Nation came as a shock to the people of India, and even our elders observed his cremation here in the village. Today, villagers of all ages worship Gandhi like god, and offer flowers and formal puja to his idol every day,” octogenarian Shanmukappa Kammar says.

“Gandhi’s visit had much impact on the village. Many villagers changed their lifestyle. Bapu is not only a name, but a strength and inspiration to all of us. When Gandhi visited us in 1934, someone from Maranabasari village made a garland of the flowers from an arka plant and offered it to him, which he accepted happily. In our village, many people follow Gandhian principles,” reflects Ravindranath Doddameti, a writer and poet. “India lives in her seven hundred thousand villages,” Gandhi had once declared. But this humble village in Karnataka is where the halo of the Mahatma continues to live and guide.

Now we are on Telegram too. Follow us for updates
TAGS
Mahatma Gandhi Gadag