10 lakh to attend Panchamasali meet in Bengaluru on Sunday

They are planning to intensify the agitation if the government fails to respond to their demand by Sunday evening.

BENGALURU: To bring pressure on the State Government to consider their demand for inclusion in the 2A reservation category, a convention of Panchamasali (Lingayat) community will be held in Bengaluru’s Palace Grounds on Sunday. The community leaders expect around 10 lakh people to attend the event. They are planning to intensify the agitation if the government fails to respond to their demand by Sunday evening. 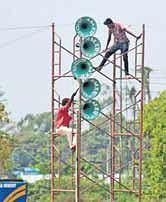 Former MLA Vijayanand Kashappanavar, who is also the president of Lingayat Panchamasali Mahasabha, said that 10 lakh people from 18 districts will be present at the venue. “If the State Government fails to take a decision by Sunday evening, we will intensify the stir and start a protest outside Vidhana Soudha,” he threatened.

Sri Jaya Mruthyunjaya Swami and Sri Vachanananda Swami, who took out a padayatra from Basavakalyan to Bengaluru for the cause, will lead the convention. A number of senior leaders from all political parties, including ministers Murugesh Nirani and C C Patil, are expected to attend. “We are asking for reservation in education and employment and the State Government can take the decision without constituting any panel,” Kashappanavar said.

Those attending the meet have been told that they should be ready to stay in Bengaluru for 2-3 days as they may have to continue their agitation. “When Jagadish Shettar was CM in 2012,  a House panel headed by C M Udasi was formed to look into the demand, and the report stated that Lingayat Panchamasalis should be included in 2A category.

There is no need for any report now,” he added. “There are 108 subsects among Lingayats ... 34 have been given 2A category and also OBC status by the Centre. Apart from demanding the State Government to give 2A reservation, we also want the Centre to grant OBC status to the remaining 74 subsects,” he said.
Meanwhile, Home Minister Basavaraj Bommai said the issue was discussed at the Cabinet meeting and they will proceed further after consulting legal experts.

Bengaluru: The city traffic police have made traffic diversions on Sunday owing to the Panchamasali convention. Police have advised the public to avoid Palace Grounds and use other routes. People attending the event can park their vehicles at Tripuravasini Gate No 2 and can exit from Gate No 3. Parking is banned on Ramana Maharshi Road, Sir CV Raman Road, Ballari Road, Mekhri Circle, Jayamahal Road, MTV Jayaraman Road, Palace Road, PRTC Junction to Water Tank Junction, and T Chowdaiah Road, from 4 am on Sunday until the event ends. People heading to the airport from south Bengaluru can take the following route - left turn at Cauvery Junction, proceed towards Bhasyam Circle and on Jeevaraj Alva Road, New BEL Road, Devasandra, and reach Hebbal flyover. East Bengalureans have been told to reach the airport through this route - MG Road, Kamaraj Road, Wheelers Road, ITC flyover, IOC flyover, Banasawadi Main Road, ORR, and a right turn at Bagalur Cross.

Now we are on Telegram too. Follow us for updates
TAGS
Panchamasali bengaluru