Licences in these streams will be issued to Gram Panchayats by a committee headed by the assistant commissioner at the taluk level.

In a major shift from the Karnataka sand policy 2011 and subsequent e-auctioning of sand blocks through amendments to the Karnataka Minor Minerals Concession Rules 2016, the State Government notified the Karnataka Sand Policy 2020 on May 21, 2020.

Under the policy, which is yet to be implemented, powers have been given to Gram Panchayats to issue permits for transportation of sand through bullockcarts and tractors to consumers in villages for their own consumption from I, II, III order streams by collecting a fixed fee. Licences in these streams will be issued to Gram Panchayats by a committee headed by the assistant commissioner at the taluk level. 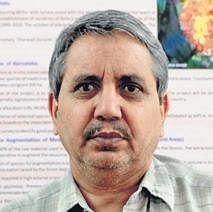 As per the estimation of the Mines Department, around 45 million metric tonnes (MMT) of sand is required in the State per year. Of this, around 30 MMT is produced and supplied as manufactured sand (M-sand). About 4.5 MMT of natural sand is supplied legally from various sources. Some sand comes from other states. There is a gap of about 8.5-10 MMT of sand which is supplied and procured illegally. Some agencies put the requirement between 60 and 70 MMT per year.

Sand mining leads to destruction of environment. Development versus environment is one of the great debates of our times and the preservation of Western Ghats is one such. The pristine Ghats are in the limelight because of a report by the high-level working group (HLWG) headed by space scientist Dr K Kasturirangan that sought declaration of 37 per cent of the area, or 1,533 villages, in the Ghats as ecologically sensitive. The National Green Tribunal (NGT) too has given a directive to the Centre to implement the report by December-end 2020. One of the recommendations of the report is a complete ban on mining, quarrying and mining of sand in ecologically sensitive areas.

This will be in direct conflict with Sand Policy 2020. If the report is implemented, all the 1,533 villages will not be able to make use of powers given to Gram Panchayats.  The state’s Sand Policy 2020 is on the lines Andhra Pradesh’s policy and shifts from past policies by classifying the streams as I, II, II, IV, V and VI. The classification will not stand legal scrutiny if the streams are not notified under relevant laws.

Sand mining in evergreen and semi-evergreen forests would largely affect the  riparian ecosystem, fauna and flora. A riparian ecosystem is a vegetated area near a stream, usually thickly forested, which helps shade and partially protect the stream. It plays a key role in increasing water quality in associated streams, rivers, lakes and estuaries. Sand mining will destroy them, enhance the drying of perennial steams leading to extinction of amphibians, fish and other water habitat fauna/flora.

Now we are on Telegram too. Follow us for updates
TAGS
Kasturirangan report sand mining Karnataka