He also revealed how many politicians are involved in the sand mining mafia and why the policy is being pushed now.

BENGALURU: As the Karnataka government has lifted a ban on sand mining and is all set to announce a new policy, well-known environmental and anti-corruption activist SR Hiremath in an interview with The New Sunday Express said that sand mining is worse than illegal iron ore mining, which he fought against and won. He also revealed how many politicians are involved in the sand mining mafia and why the policy is being pushed now. 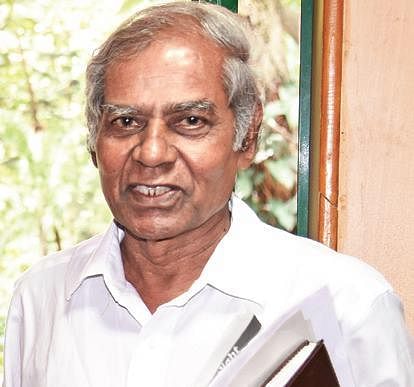 What is happening in the sand mining industry? What is its impact on the environment, especially because of recurring floods and droughts?
Sand mining has been reckless and irresponsible, especially since 2014. It is worse than illegal iron ore mining, which had its impact in Ballari and neighbouring districts of Karnataka and Andhara Pradesh. Sand mining has had a devastating effect on the environment and climate. As the reduced water absorption capacity of rivers led to adverse consequences like floods and droughts, the National Green Tribunal had to step in. The industry, to a large extent, switched over to M (manufactured) sand, but then again continued with equally reckless stone quarrying to manufacture sand. The crisis, however, continues.

What will be the impact of sand mining? As it is, there is a tangible difference in everyday life, affecting people living near such places, and also in cities like Bengaluru.
The worst sufferers are people living nearby and whose livelihoods are intricately linked to the environment. The worst-affected areas, among others, are: Deodurga taluk in Raichur along Krishna river, Ranebennur taluk in Haveri due to mining in Tungabhadra river, Mandya district where an entire hillock has disappeared and Tavarekere hillock in Bengaluru Urban which borders Magadi taluk of Ramanagar, which has seen worst quarrying. The last two are for manufacturing M sand.

Sand is a very important component of the construction industry. Can an alternative be found? Do we need a regulatory mechanism?
The question of striking the balance should be answered not just in the short term concerning only the real estate sector, but also with a long-term perspective, considering a healthy relationship between nature, society and culture. But unfortunately, this perspective is not included in the development approach and that lacuna is leading not only to climate change and its disastrous consequences but also total lack of accountability. These vital issues were raised by us in our PIL (WP No.562/2009) and subsequent writ petitions relating to Goa and Odisha. The apex court, however, addressed them to a limited extent.

When we have moved from fossil fuel to clean energy, can anything be thought of to replace sand? What are the alternatives?
M-sand is an alternative, but it is equally disastrous to ecology and local people. Another alternative, which is being explored is recirculation: extracting sand from debris. The real alternative is to use the minimum necessary quantity of sand by controlling our unnecessary aspirations, changing our perspective and lifestyle.

What should the sand policy have? What should Karnataka adopt from Kerala and Tamil Nadu in its policy?
The sand policy is not as big a problem as it sounds. But the challenge before the government and citizens is how to effectively deal with the powerful sand mafia, which has well-entrenched corrupt politicians and officials. The most obvious example I can give is the experience of my visit and analysis of the situation in Raichur, especially in Deodurg taluk. The task force headed by the deputy commissioner has failed miserably and MLAs, MPs, their relatives and others are involved in illegal sand mining and related activities. MSIL, MML and Hatti Mines, which have been appointed by the government, should help citizens get sand for their bona fide needs. The situation in Tamil Nadu, Telangana and Andhra Pradesh is equally bad.

What is your view on inter-state transportation of sand? Which are the most exploited districts in the state?
Sand is being transported illegally to Maharashtra from Vijayanagar district after it is mined in Bheema river, it goes to Tamil Nadu through the Hosur route and to Kerala from Udupi and surrounding areas. The districts that are facing the brunt of the problem are Haveri, Shivamogga, Koppal, Raichur and Bengaluru Urban. Especially at Taverekere in Bengaluru, quarrying is going on for M-sand and there is an involvement of a former minister.

Now we are on Telegram too. Follow us for updates
TAGS
Karnataka sand mining