Damned again: Karnataka, TN slug it out over Mekedatu project

At the core of what now seems more like a political and emotive issue is the utilisation of surplus water that now flows from Karnataka, the upper riparian state, to Tamil Nadu.

BENGALURU: The Cauvery river water sharing issue has once again fuelled a political battle between the two neighbouring states of Karnataka and Tamil Nadu over the former’s plans to build a dam at Mekedatu, about 100 km from Bengaluru. Karnataka is determined to go ahead with the Rs 9,000 crore project amid opposition from Tamil Nadu. Karnataka Chief Minister B S Yediyurappa has directed the officials to prepare an action plan, while his Tamil Nadu counterpart has upped the ante by making all efforts to stall the project, and has convened an all-party meeting on Monday.

The Mekedatu balancing reservoir-cum-drinking water project, with a component to generate 400-megawatt of electricity, is intended to use this excess water. Karnataka contends that the project, with a capacity to store 67 tmcft of water, will help it to additionally utilise 4.75 tmcft of water to meet the drinking water needs of Karnataka, including the whole of Bengaluru city.

At present, Bengaluru gets around 1,450 million litres per day (MLD) of Cauvery water, but the requirement is expected to go up to about 2,900 MLD over the next 10 years, a senior official from Bangalore Water Supply and Sewerage Board (BWSSB) told The New Indian Express. Officials hope that beyond 2030, the Mekedatu project will help address the drinking water needs of Bengaluru, a burgeoning metropolis and one of the growth engines of the Indian economy.

TAMIL NADU’S OPPOSITION
Tamil Nadu perceives the dam, with a capacity to store 67 tmcft of water just across the border in Karnataka, as a hindrance to the free flow of surplus water. Water from Karnataka is stored at Mettur Dam, the lifeline for paddy cultivation in the Cauvery delta region in Tamil Nadu during the ‘Kuruvai’ season. The Mekedatu project, TN feels, will jeopardize the interests of its farmers. The state’s application questioning the project is pending before the Supreme Court. The state is trying to exert pressure on the Centre against granting permission to Karnataka’s project. Tamil Nadu’s argument is mainly centred around the dam putting an end to the free flow of water and concerns over Karnataka increasing its area under irrigation in the Cauvery delta.

KARNATAKA’S STAND
However, Karnataka Government and its irrigation experts dismiss Tamil Nadu’s concerns as unfounded, and term the project as mutually beneficial. “The project in no way affects the interests of the farming community of Tamil Nadu,” Chief Minister B S Yediyurappa stated in his recent letter to his TN counterpart M K Stalin. Yediyurappa’s effort to seek cooperation from the newly elected Tamil Nadu Chief Minister has been met with stiff resistance with Stalin, in his reply, firmly asking Karnataka not to pursue the project. 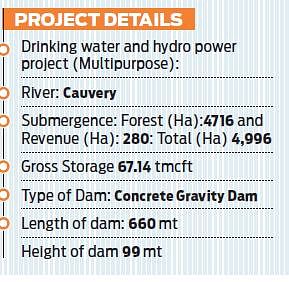 “There is no legal hitch to take up the project. Tamil Nadu cannot stop Karnataka from going ahead with the project for two reasons — it’s a drinking water project and no irrigation component is involved in it,” Prof Aravind Galagali, an irrigation expert and former Director Krishna Bhagya Jala Nigam (KBJNL) Ltd under the Ministry of Water Resources told The New Indian Express.

He says the state has established its legal rights in terms of surplus water going out and explained that it is beneficial to Tamil Nadu, especially at times when Karnataka is unable to release 192 tmcft during water-deficit years. Under such circumstances, the water stored in the dam can be released, he noted.

Sources say even technical experts in Tamil Nadu agree with Karnataka’s contention, but it has now become more of a political and emotive issue and the government there is concerned about its impact on farmers depending on surplus water for cultivation. The Cauvery Water Disputes Tribunal does not bar Karnataka from taking up the project as long as it honours the release of 192 tmcft of water to Tamil Nadu. The release of water is spread over the entire year, with the monthly releases in a normal year. A normal year is when the state receives normal rainfall.

PROJECT BACKGROUND
In fact, the Mekedatu hydroelectric project is not a new one, as Karnataka conceived it way back in the 1970s. However, when the state started planning the project in 2008, Tamil Nadu filed an application before the Supreme Court. The Karnataka Government’s project report has been cleared by the Central Water Commission (CWC), the apex body for water management in the country. The commission gave its in-principle approval to go ahead and prepare a Detailed Project Report (DPR) for the implementation of the project. About three years ago, a report was submitted for investment clearance of around Rs 6,000 crore, but now the revised project cost is around Rs 9,000 crore.

Even as it awaits permissions to start the work, preparations are being made in terms of getting technical reports ready. Apart from sorting out the legal issues, Karnataka needs approval from the Ministry of Ecology and Forest and National Green Tribunal (NGT) as over 4,700 hectares of forest land needs to be acquired for the project. Yediyurappa is expected to hold a meeting soon with legal and technical experts to take the project forward.

MEKEDATU
Mekedatu in Kanakapura taluk is a serene place in dense forests where Cauvery river passes through a narrow crevice, a much sought-after weekend getaway for Bengalureans. It is about 100 km from Bengaluru.

DAM SITE
The balancing reservoir, with a storage capacity of 67 tmcft, is around 4 km downstream of Sangama. The dam will be located around 50 km from the Biligundlu measuring station in Tamil Nadu on the Karnataka border, and around 100 km from Mettur dam in TN.

Now we are on Telegram too. Follow us for updates
TAGS
Karnataka Tamil Nadu Mekedatu