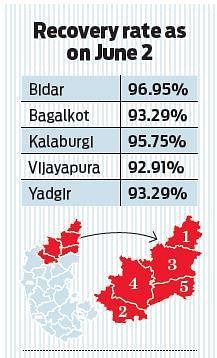 Meanwhile, Kodagu 90.09 per cent and Mandya (90.04 per cent) are the two other districts with a high recovery rate.“When we started seeing more cases, we decided to take up a door-to-door survey. When the health officials noticed people with symptoms during the survey, they tested them immediately and provided them with home isolation kits, which had medicines like Ivermectin, calcium and zinc tablets along with paracetamol. We advised the patients to start with the medication even before their Covid-19 test results came out. With these measures, we noticed that many patients recovered faster. this helped in increasing the recovery rate,” reasoned Bagalkot District Health Officer Dr Ananth Desai. The authorities concerned also ensured that there was no shortage of oxygen or drugs. “Giving the right kind of treatment at the right time helped in early recoveries,” he added.

Kalaburagi DHO Dr Sharama Basappa Ganajalakhed said that earlier, while the district saw cases in urban areas, it started to rise in the hinterland in the second wave. “We roped in ASHA workers to identify and test cases in rural areas. We constituted a village task force to keep a tab on Covid-positive patients. Those in serious condition were sent to hospitals. Also, a team was set up to check on those in home isolation. Doctors would call patients in home isolation and check on their status. Also, the lockdown helped in controlling the spread of infection. We also identified villages with high positivity rate and increased testing. Tests were also conducted in villages with zero cases,” he said.

Now we are on Telegram too. Follow us for updates
TAGS
Recovery rate Karnataka COVID 19