How 'Captain Mani’ changed the fortunes of Kerala football.

THIRUVANANTHAPURAM:  The Maharaja’s College Stadium was bursting at the seams on the evening of December 27, 1973. There are no official figures to show, but at least 50,000 were yearning for a goal that would break the deadlock between Kerala and Railways and help the hosts lift the prestigious Santosh Trophy for the first time.

The onus was on T K Subramanian -- Kerala’s captain and the scorer of two goals thus far. And deliver he did. In the 80th minute, the inside forward found the winner after a melee inside the Railways box to earn him the nickname of ‘Captain Mani’ and more importantly change the fortunes of Kerala football.

“Railways were a mighty team and we were a famished lot due to several injuries. But Mani had the lady luck on his side that day to complete his hat-trick and win the big prize,” reminisced T A Jaffar, vice-captain of that side, on Friday, a day after his captain’s death.

“When you think of it, it feels like he was predestined to do it. To score three goals in such an important f 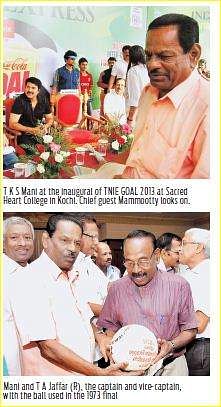 inal does not happen always. You needed something more than your ability to do things like that, and I think Mani had it,” said Xavier Pius, Mani’s fellow forward in the team.

Kerala’s opening goal came in the 38th minute when Mani used his head to bulge the net while his second came from a ball crossed in by Jaffar. “He was a striker who could score with his head and legs.

And the 1973 final was a perfect example for this,” Jaffar said. “He ran the Railways defenders ragged that day. While K P Williams on the other flank was more of a creative player, Mani was charging at them despite being a heavily marked man,” said Jaffar.

“That he managed to score three despite all that attention is incredible,” he said. Mani was never a vocal presence on the field, but Jaffar felt it was his ability to inspire others that made him a successful captain. “He talked very little in the dressing room even before the final. But he kept each one of us focused and inspired in his own way. He literally led the team with his performance on the field,” Mani’s former deputy said.

“The time was running out and that was when he found the winner in the 80th minute,” said Jaffar. “If there was one goal that rewrote the fate of football in Kerala, it was that. The Santosh Trophy win inspired thousands to play football and made sure Mani will always be remembered by the state’s footballing fraternity,” he said.