With two persons succumbing to fever here on Sunday, the total number of fever deaths in the state capital since June have gone up to 124.

Of the 227 dengue cases reported, 124 suspected cases were from the capital district. Malappuram was a distant second with 32 cases and Kozhikode reported 26 dengue cases. 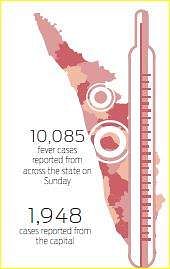 Twenty-two cases were reported from Alappuzha, 13 from Thrissur, nine from Kollam and Kasargod, eight from Kannur, seven from Pathanamthitta, six from Wayanad and two from Ernakulam. Three suspected and three confirmed leptospirosis cases were also reported on Sunday. The DHS report also said 11 persons were detected with H1N1.

Now we are on Telegram too. Follow us for updates
TAGS
dengue Kozhikode Malappuram H1N1 fever deaths DHS