Five fever related deaths, including that of a seven-month-old child and a seven-year-old boy, were reported in the state in the past two days even as there was no let up in fever cases.

THIRUVANANTHAPURAM: Five fever related deaths, including that of a seven-month-old child and a seven-year-old boy, were reported in the state in the past two days even as there was no let up in fever cases. 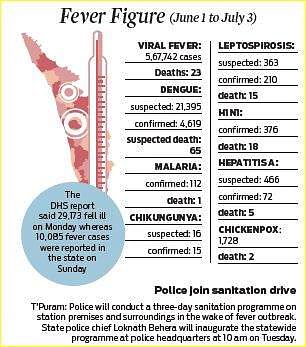 A seven-month-old child from Cheruvady in Kozhikode and a seven-year-old from Kanjirampara in Thiruvananthapuram died of  suspected dengue on Monday and Sunday. According to the report of the Directorate of Health Services, one more person died of suspected dengue in Thiruvananthapuram in the past two days. While one fever death was reported from the capital district, an H1N1 death was reported from Thrissur.

Monday saw a spurt in the number of fever patients. The DHS report said 29,173 fell ill on Monday whereas 10,085 fever cases were reported on Sunday. Dengue also saw a leap on Monday with 678 suspected and 227 confirmed   cases. On Sunday, the DHS had only reported 227 dengue cases. There were four suspected  and seven confirmed leptospirosis cases, four Hepatitis and nine H1N1 cases on Monday.

Police will conduct a three-day sanitation programme on station premises and surroundings in the wake of fever outbreak. State police chief Loknath Behera will inaugurate the statewide programme at police headquarters at 10 am on Tuesday.

Now we are on Telegram too. Follow us for updates
TAGS
fever Dengue leptospirosis H1N1