THIRUVANANTHAPURAM: Finance Minister Thomas Isaac has said the sale of goods above the MRP was illegal. “It has come to the notice of the government that some traders use GST as a cover to sell goods above the MRP. They add GST to the existing MRP which is illegal,” he said.

“The existing price is the sum total of VAT, service tax, Central sales tax and other impositions. GST has to be applied only after subtracting old levies,” he said. 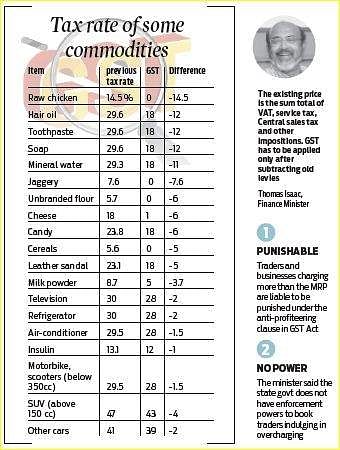 The minister also released a list of 10 items for which the prices have come down after GST implementation. They included food, stationery, textiles, consumer durables - whose tax rate had come down. According to the minister, the state government does not have enforcement powers to book traders indulging in overcharging. “Public can lodge complaints with sales tax offices, which in turn will hand over the complaint and supporting documents to the state screening committee of the Anti-Profiteering Authority,” he said.

The state screening committee will be formed after the Central Anti-Profiteering Authority is constituted. But this would take at least five months.Traders and businesses charging more than the MRP are liable to be punished under the anti-profiteering clause in GST Act. If found guilty, there is provision to cancel registration of the establishment.

The penalty includes even cancellation of registration, he said. The minister said the decrease in taxes of commodities should be passed on. “Unfortunately this is not happening. “Worse, the price of chicken has gone up though all taxes on the commodity was removed. Earlier VAT on chicken was 14.5 percent,” he said.

Now we are on Telegram too. Follow us for updates
TAGS
GST VAT service tax Thomas Isaac