Mobile phone used to capture sexual assault of Malayalam actress was handed over to Dileep: Police

The police on Friday submitted before the court the mobile phone used to capture the visuals of the sexual assault on the actress was handed over to actor Dileep.

KOCHI: The police on Friday submitted before the court the mobile phone used to capture the visuals of the sexual assault on the actress was handed over to actor Dileep. They suspect Pulsar Suni’s former counsel gave it to the actor.Objecting to Dileep’s bail petition in the Judicial First Class Magistrate Court at Angamaly, the police in its report, said the phone was handed over to Dileep and the subsequent dispute over payment led to blackmail and arrest of the actor.

The report said Dileep did not give the amount promised to Pulsar Suni and team. Suni gave the phone to his then counsel Pratheesh Chacko while coming to surrender before the Ernakulam Chief Judicial Magistrate Court.In the report, the police said they suspect Chacko handed over the phone to Dileep.

However, the police are yet to question Chacko to prove it and seize the mobile phone. “If the suspect is released on bail, he will influence Pratheesh Chacko and thereby hamper the investigation,” the report said.

The conspiracy to blackmail Dileep was hatched by Suni with other accused Sanal alias Mesthiri Sanal, of Mayalapra; Vishnu, of Thrikkakkara; and Vipinlal, of Changanassery, who are the eighth, ninth and 10th accused, respectively.In the report, the investigation team cited several other reasons, including the actress’ safety, for objecting to Dileep’s release. “If Dileep is released on bail, the chances of police recovering the phone will get slim. The police are planning to question several noted personalities close to Dileep,” the report said.

“The complainant being an actress, the suspect, if released, may attempt to threaten her at film sets and disrupt her work which may even lead to law and order issue,” the police said.
The report said the release of the accused would send a bad message to society. The accused may also try to influence the witnesses. “If released on bail, Dileep may escape from the clutches of law and will make himself unavailable for the trial of the case,” the report said. 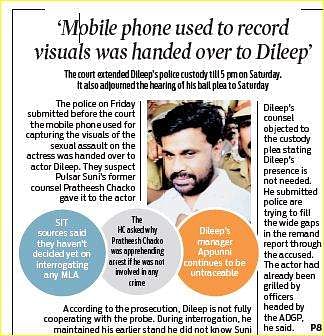 Hearing of Pratheesh Chacko’s bail plea adjourned
Kochi: The Kerala High Court on Friday asked why Pratheesh Chacko, former counsel of Pulsar Suni, was apprehending arrest if he was not involved in any crime. The court made the verbal observation while considering Chacko’s anticipatory bail plea.

The prosecution submitted first accused Pulsar Suni had specifically said he handed over the phone to the petitioner and the police had made partial recovery from Chacko’s office premises. The court said notice under CrPC 41 A is only for asking a person to appear before the police for interrogation and not for arresting the person. The court adjourned the hearing of the bail plea to Tuesday.

‘His phone was switched off for two days before Feb 17’
Kochi:Anwar Sadath MLA on Friday said Dileep’s mobile phone remained switched off for two days before February 17, the day when an actress was abducted and sexually assaulted in Kochi. “I tried to contact Dileep for two days before the incident to invite him to a function. His phone was switched off. On the day when the actress was assaulted, I tried his phone again and he answered,” Sadath told reporters. He said he met Dileep on several occasions after the incident. “Dileep and I have known each other for years. It is natural I contacted him to know whether he was involved in the incident. Whenever I spoke about it, Dileep swore he did nothing wrong,” Sadath said.

Case filed against Kamal Hassan
Kochi: A complaint has been filed against actor Kamal Hassan at the Kalamassery police station for divulging the name of the victim in the actor abduction case. The complaint was filed by Gireesh Babu, a Kalamaserry resident.

Manager ununtraceable
Kochi: Appunni, DIleep’s manager-cum-driver and a suspect in the case, remains untraceable.An officer in the probe team said, “Though the police summoned him for questioning, Appunni is yet to turn up. The mobile phones he used are still switched off.”