Thus far.  no further. time to take a stand

Though situated in a prime location, the bus station remains filthy and uninviting

KOCHI: The city is now home to one of the most advanced and attractive public transport systems with metro trains and its thematic stations lending it beauty. On the far end of the spectrum is the KSRTC stand, an eyesore and an assault on all senses despite being an important bus station in central Kerala.
As many as 108 schedules, including inter-state services, operate from the Ernakulam bus station. The services operated by neighbouring Tamil Nadu and Karnataka are extra. According to KSRTC, the number of passengers on Mondays and weekends cross 50,000.

But travellers coming to this bus stand are likely to think of taking the first bus out because what greets them here is reeking air, heaps of garbage, waterlogged areas, uncovered drainage and mosquito swarms at sundown.

And travellers wishing to rest their weary legs will be given a feel for the ride ahead; instead of chairs, the old seats of scrapped buses have been given new life as benches in the waiting area.
No directions are required to find one’s way to the pay toilets on the premises; just follow your nose. Everything - from the water cooler to wash basins to the rest rooms - looks insalubrious and revolting even though the station is situated in a prominent spot.

Unrest among employees
Most of the KSRTC employees are exasperated at the state of the Ernakulam bus station. Not surprisingly, the noxious atmosphere of the bus station has made it a hub for the spread of diseases and recently, several employees at the KSTRC garage who spend several hours working here came down with dengue. The amenities for KSRTC employees are also pathetic. The resting room for conductors looks like there are several cots placed in a swimming pool. The staff who have to walk carefully on wooden planks and bricks over stagnant water to get to their cots. 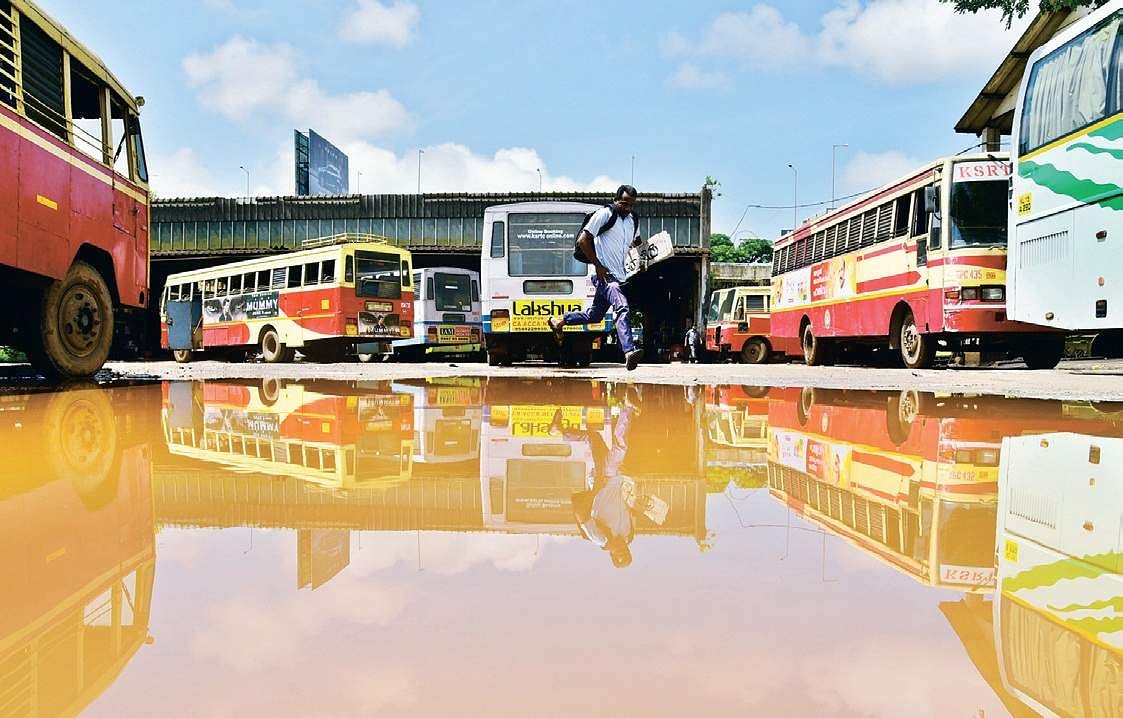 Construction of a new bus station
There is a proposal to demolish the existing bus station and construct a new bus terminal cum station. But considering the state of affairs, it is unlikely to happen in the near future. While KSRTC authorities cleared the project and even secured permission from the Kochi Corporation, it was later noted demolishing the bus station building and the garage would affect the operation of the depot. So, it was decided to first construct a garage-cum-administrative block to which operations could temporarily be shifted. Ernakulam MLA Hibi Eden allocated ` 2 crore from his asset development fund to construct the block. The work, which started in September 2014, became a non-starter following a vigilance inquiry when cracks were found in the newly constructed building.

As it stands at present, nobody knows when the work will be resumed. “This is nothing but apathy on the part of the KSRTC in managing the project,” said Hibi. “I regret allocating the fund to KSRTC. I could have utilised the money towards some other development activity in the city. With the garage construction coming to a standstill, the development and renovation of the bus station itself is in a crisis because it is necessary to complete the garage construction before the existing building is demolished. Usually, projects get delayed because of funds and land. In the case of KSRTC, they can’t cite a lack of either of these. The KSRTC was not even able to maintain the bio-toilets.” 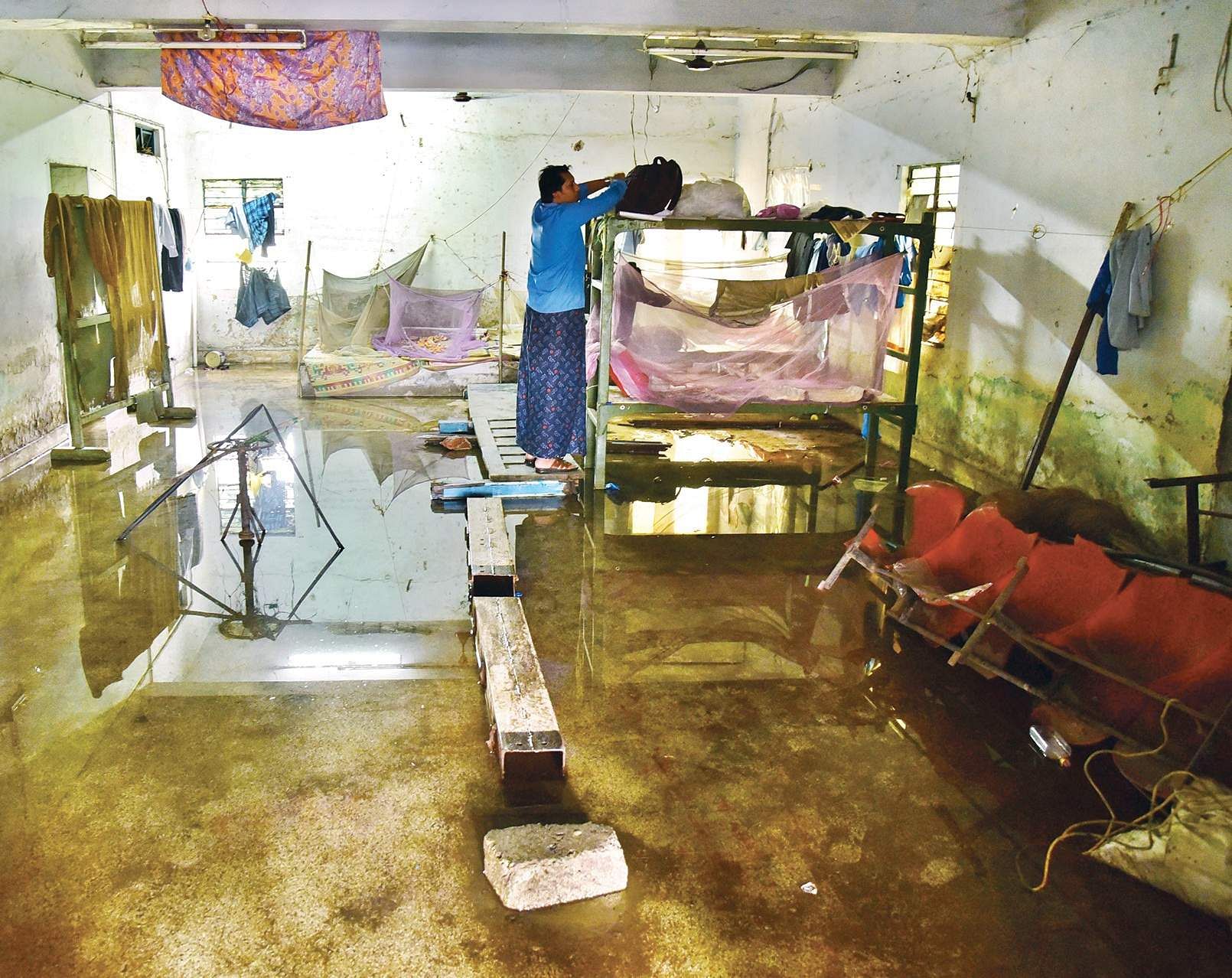 Toilets
The condition of two bio-toilets also installed with MLA funds have not fared a better fate. According to KSRTC employees, the storage tanks of these toilets were too small and they started to overflow, necessitating their shutdown.

Parking
Perhaps, KSRTC is the only state-run company with under-utilised land in a prime location in the city. And though it has a large sprawl spreading from Ernakulam Junction (South) Railway Station to the Ambedkar Stadium, the Corporation does not provide parking space for passengers’ vehicles.

Waterlogging and waste dumping
Waterlogging and waste dumping are two other mounting problems at the bus station. While the former is caused by the low-lying layout of the land, shop owners at the bus stand are the culprits behind the garbage piles. ‘’Shop owners have found the space behind parked buses a perfect place for throwing waste,” said a KSRTC employee. “The garbage gradually falls into the canal, causing waterlogging. A good shower causes the bus stand premises to be flooded with the water overflowing from the canal. Though the Kochi Corporation cleans up the canal often, the garbage is taken out and kept on its bank. It falls back into the water and the cycle of flooding continues with the next rain.”